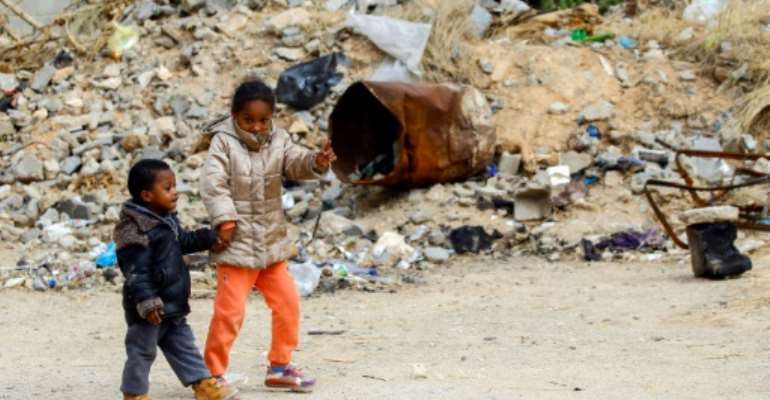 Libyan children play outside an unfinished building which has become home to many displaced families in Tripoli. By Mahmud TURKIA (AFP)

Layla Mohammed barely had time to gather her children's belongings before fleeing their southern Tripoli home when shelling targeted the Libyan capital's outskirts earlier this year.

For months she moved her family between apartments as soaring rents in the crowded city exhausted her savings, eventually leaving them squatting in an unfinished building alongside dozens of other families.

More than 140,000 Libyans like Mohammed have fled their homes since April, when forces loyal to eastern-based strongman Khalifa Haftar launched an assault on Tripoli, seat of the UN-recognised government.

In central Tripoli, the grey skeletons of a highrise construction site -- abandoned since 2008 due to a property dispute -- now host more than 170 families.

For some, the high rises in Tarik al-Sekka were "a gift from heaven", since the alternative was living in the street.

But "we live like animals -- without running water, electricity, or even sewage," said Mohammed, a mother of seven.

Her youngest son is sick with a chronic respiratory illness. "The dust will kill him," Mohammed despaired.

"All we want is to live in dignity," she said.

Neighbour Samira crowds her four children into a single room in a nearby building, preferring the greater warmth it affords over any sense of privacy.

She feels safe in the eight square metre room, which thanks to a benefactor has a door and a window. "Even if it's not ideal, at least it's free," she said.

Initially, Samira was determined to stay in her southern Tripoli home, even as combat crept closer over the months.

But when a rocket fell near her house the terror became too much and she fled, she said. 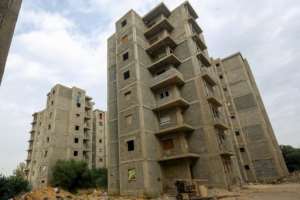 These unfinished apartments have provided a welcome, if spartan, space for families who have fled the fighting in Libya's capital in recent months. By Mahmud TURKIA, Mahmud TURKIA (AFP)

The buildings sheltering Samira and Mohammed are just metres from the seat of the Government of National Accord (GNA).

But authorities have done little to help.

Mayssoun al-Diab is in charge of displacement issues for the GNA's crisis committee but admits "the government has offered them nothing, not even moral support".

According to her, the government was unable to find shelter for all the displaced, leaving many at the mercy of avaricious lenders.

Her committee requisitioned schools, public buildings and hotels to house the displaced, but faced with an ever-growing influx as the battle dragged on, more and more families found themselves homeless.

When term time resumed, the situation got worse. After living for months in one Tripoli school, Khairi al-Doukali said his family was "evicted alongside dozens of other families" to allow classes to restart.

Eventually, the Doukali family also ended up on the Tarik al-Sekka building site.

In the face of government inaction, civic-minded Tripoli residents have responded to heartfelt pleas online and stepped in to help. 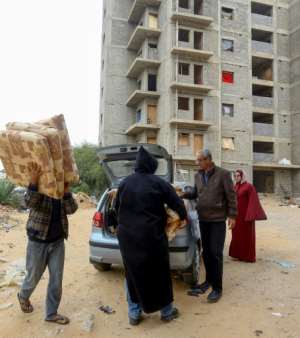 Every day people give food, clothing and blankets, according to Salem el-Chatti, a member of a neighbourhood support group.

"We try to distribute donated items in a fair manner," he said.

A man named Abdel-Atti arrives to donate a mattress and blankets.

"I pass by these buildings every day," he said.

"It breaks my heart that my kids are fed and sleep warm inside while our brothers are experiencing this tragedy."