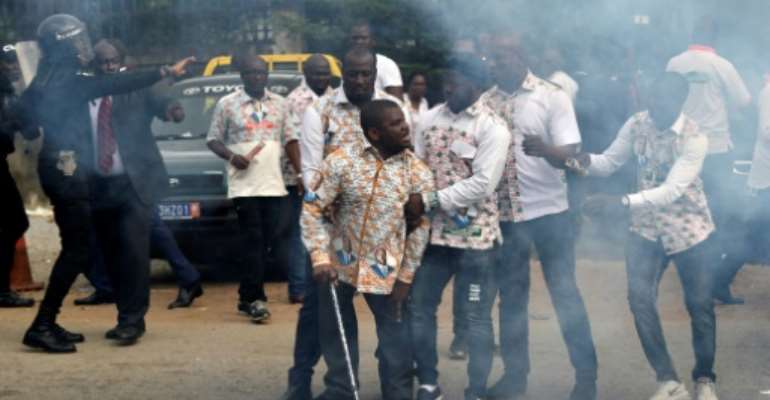 An Ivorian former rebel leader who hopes to stand for president next year denounced on Tuesday "unacceptable brutality" by security forces against his supporters.

Teargas-wielding officers earlier stormed the offices of Guillaume Soro's party in the economic hub Abidjan, and prosecutors said 15 of his supporters were detained on Monday.

Soro was due to land back in Ivory Coast on Monday after being out of the country for six months, but instead diverted his plane to Ghana and eventually flew to Spain.

State prosecutor Richard Adou said an arrest warrant had been issued against Soro for an "attempt against the state authority" and intelligence services had evidence that showed the "plan was to be carried out soon".

"The brutality of the repression against the Generations and People in Solidarity (GPS) party... is unacceptable," Soro, who was parliament speaker from 2012 to 2019, wrote on Twitter.

He said the pilot of his private jet had been informed en route that the plane could be "assaulted" at Abidjan airport and decided to divert the flight to Accra.

However, he said the Ghanaian authorities refused him entry after he landed. He reportedly later flew to Spain.

Ivorian security forces were deployed heavily on Monday to prevent a large showing of Soro's supporters either at the Abidjan airport or in the city.

The presidential election scheduled for October next year looks set to take place in tense conditions.

Violence in 2010-11 that followed a previous election caused 3,000 deaths, and local elections last year were also marred by fraud and fighting.