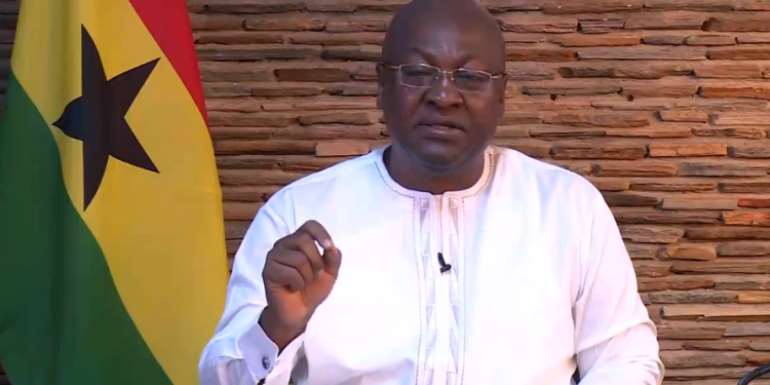 Former President John Dramani Mahama has accused the governing New Patriotic Party (NPP) of promoting security personnel based on their affiliation to the party.

Speaking during a Facebook engagement dubbed John Mahama Live, the former President said the situation was causing disillusionment within the rank and file of the services.

“Everybody remembers that during our time, crime was low. That was because we put the right people in the right place. We didn't do promotion into the security service based on party affiliations. Unfortunately, that is what this government has done. If you not committed to their party, other people will be promoted over you. There is demoralization in the security service. If the President likes, he should ask his security personnel. Our security service personnel are not happy. When I was in office, we didn't do promotions based on one's party.”

“I pledge to the people of Ghana that we will listen to them and whatever concerns that they have, if God gives me a second term in office, we will see a more transparent government. We will deal more with the issue of corruption in terms of strengthening the institutions that deal with corruption.”

He also said that a National Democratic Congress (NDC) government under him will put in place more stringent measures to fight corruption in Ghana.

He said the approach of the current government cannot be said to be an effective fight against corruption and a government led by him will do much better.

He accused the Akufo-Addo government of discouraging institutions set up to fight corruption from doing their work.

NDC calls for law against nepotism

Many stakeholders, notably the minority National Democratic Congress (NDC) have called on the nation's leaders to put in place measures to ensure that the security services is independent, well-resourced and insulated from partisan politics.

They are also calling for the enactment of an anti- nepotism legislation to check abuse of power by governments.

According to them, the governing New Patriotic Party (NPP) is running a nepotistic government contrary to President Akufo-Addo's promise to Ghanaians in 2016 as over fifty members of the current administration are directly related to President Nana Akufo-Addo.

John Mahama has in the past accused the Akufo-Addo government of superintending over “incidences of corruption and nepotism of historic proportions.”

In a 2018 statement, Mahama urged President Akufo-Addo to fight corruption and deal with nepotism in his government as he promised ahead of winning the 2016 elections.

He said Nana Addo must also ensure the prosecution of all alleged cases of corruption within his government.