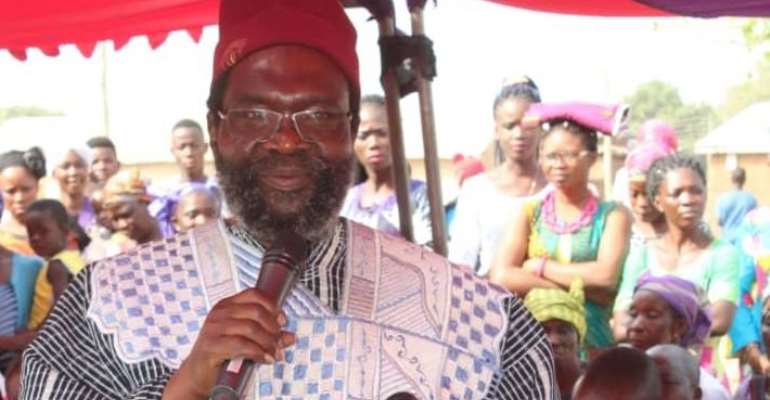 The Vaglakoro (Vagla Chief) of Tuna Dacharigu Moses Mengu (II) has said that a philanthropist is not somebody who is very rich but somebody who is prepared to share whatever little he has with others.

He explained that this has guided him to contribute to the development of his town of Tuna and across the world as much as his resources can take him.

“I’m still a poor person in spite of my International the salaries I earned ned because I invested quite a lot of y own resources in taking care of my people. While I’m Denmark I never stopped coming home and never stopped sending resources. 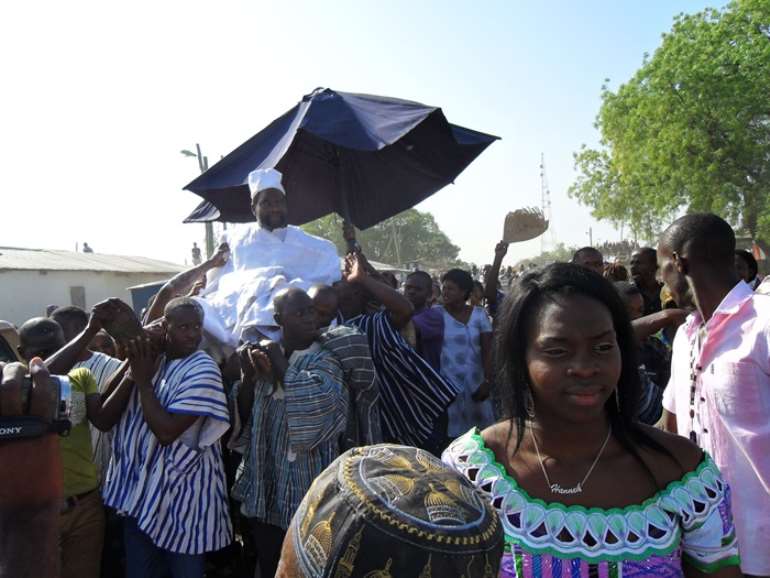 “I have personally educated over hundred of my family members and prominent names are Dr Iddisah Sulemana, Saaka (PHD student) Yakubu Seidu (PHD student) and I have helped people who are not directly from Tuna but other parts of Gonja and one them is the top Computer scientist Dr Karim Adam whom I helped to go to the UK to do his PHD”.

In an hour long interview with Bole based Nkilgi in three languages- English, Gonja and Vagla, the Vaglakoro said; “I call myself a philanthropist not because I’m rich or have resources but because I’m prepared to share whatever little I have with somebody and I hope those from this area who have a little bit to eat themselves should be prepared to share with others”

The development oriented Chief said those who are privileged enough to have education and to have travelled outside of the country should give this their priority; “if each one of them can at least raise a child to the university level it will be a big contribution to our community”.

The Vaglakoro said he was put in school in 1952 by his Uncle Mr James Mahama (later Bolewura Awuladese Pontonprong) who was a Headteacher in Tuna and was privileged to have been one of the few to acquired several degrees in his days.

He said he ventured into politics, becoming the United National Convention (UNC) candidate for the West Gonja constituency in 1979 before he had other engagements and was finally recruited as a Senior consultant by the World Association of Industrial and Technological Research Organisations (WAITRO) which is an independent, non-governmental and not-for-profit Associati established in 1970 by the United Nations to promote and encourage co-operation among industrial and technological research and development organisations (RTOs).

The Vaglakoro said he rose to become the Chief Executive Officer of (WAITRO) with the world becoming his stage since he travelled across the world to train scientist, educating people up to doctorate level and was later recruited by the goverment of Bostwana to start their Research and was recalled back to Denmark to become theSenior Project Leader at the Danish Technological Institute becoming the Director of International cooperation of the same institute.

In terms of the development of his Tuna community, the Vaglakoro said he has established a clinic to subsidize health services; has donated a 100-acre piece of land along the Tuna-Wa road for the construction of a Girls Model School to serve the Tuna Community and its neighbourhoods and has runTransport vehicles. He said he started the first computer school at Wa which has trained many people.

The Vaglakoro is known for the strides made to develop his people in areas of Education, Health and the Empowerment of his people as well as his fiery desire to eradicate poverty among his people.

“I have tried to serve as a role model and to let my people know that even from a poor background one can rise to the international stage”; he told Nkilgi Fm.

The Vaglakoro has always recognised the importance of education in order to liberate his people from poverty and damnation. He initiated a campaign to educate his people.

A website of Ghana’s Embassy of Denmark ( ghana.um.dk ) put it succinctly.

“Since he moved to Europe decades ago (1986), Chief Mengu has put about a hundred local villagers through school – only by spending his own money from his job as a Senior Project Leader at the Danish Technological Institute. His latest project is an all-girls school for the best female students from Tuna and its neighbourhood”.

It continued;”Even though he has only been a Chief for eight years (2017), being the first university educated Vagla has meant he always felt a responsibility to use his powers to help Tuna thrive. Moses, turning 70 in a short while, spends more than half of his pay check to put the youth of Tuna through education, builds clinics and helps his tribe and his village become a better place month after month, year after year”.

The Vaglakoro is mostly based in Denmark where he is well established but his modest nature is one of the most prominent features of this Vagla legend. He remained a humble Chief who won the hearts and admiration of all his people.

Vaglakoro’s people look up to the day he will finally be with them permanently in Tuna.

The same website of Ghana’s Embassy of Denmark ( ghana.uwwm.dk ) explained;

“It was not a part of Moses Mengu’s plan to move to stay in Denmark, when he first moved there in 1986. Before, he had been in Sweden, and before that again he lived and studied at The City University in London, U.K. Moses has seen more of the world than most members of the Vagla tribe could even dream of. Since he moved to Denmark with his family more than thirty years ago, his life has been split in two; Denmark, where he lives, works and has his family, and Ghana where he has since 2009 been made the Chief or ‘Vaglakoro’ of Tuna, a title once held by his father”.

The Vaglakoro said as part of his 10 Year celebration, he would hold a meeting with other Vagla Chiefs on Sunday 29th December, 2019 to discuss issues of development of the area.