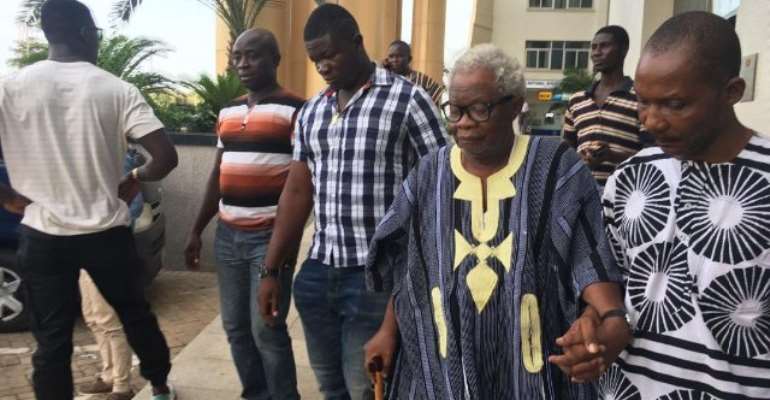 Security agencies have rounded up 17 persons in the Volta region, for their alleged involvement in activities of a group seeking secession from Ghana to form the Western Togoland.

It indicated that,” the upsurge of the self-styled ‘Homeland Study Group Foundation (HSGF) activities in the Volta region in recent times, threatens the security of the Volta and Oti regions in particular and Ghana as a whole.”

The 66 Artillery Regiment based in Ho, the Counter-Terrorism Unit of the Ghana Police Service, the Defence Intelligence (DI) and the Criminal Investigations Department (CID) of the Ghana Police Service, Accra, conducted two separate Counter Insurgency Operations (COIN), within the Hohoe Municipality of the Volta Region, to counter activities of the Western Togoland secessionist group.

The first operation which was conducted on Saturday, December 21, 2019, at Wli Todzi, led to the arrest of two persons namely Stephen Anyidoho 30, a construction labourer and Brain Todoko 40, an artist.

The two are believed to be close associates of one Mr Hope Mortey also known as Spider, who is believed to be a key member of the HSGF and suspected to be in charge of a training camp at Wli Todzi for militants of the group.

The second operation which took place on Sunday, December 22, 2019, around Gblebi Kyebi, Fodome Helu and Kwadzato all in the Hohoe Municipality led to the arrest of 15 suspects.

Those arrested and the items confiscated are currently in the custody of the Ghana Police Service for further investigations.

“All those arrested and the items seized are currently in the custody of the Ghana Police Service for further investigations”.

The security agencies have also issued a word of caution to unsuspecting members of the general public to be wary of groups or individuals who take money from them with the promise to train them and give them lucrative jobs.

“The general public is also advised to be wary of any group(s) or individuals who collect money from them with the promise to train them and give them lucrative working conditions.

“Finally, it is requested that the public provide information on individuals or activities of the group to the security agencies for prompt action,” the release added.

The separatist group declared its independence from Ghana to form the Western Togoland on November 16, 2019.

According to the group, Western Togoland covered areas including the Volta, Oti, parts of the Northern, North East and Upper East Regions.

Their 80-year-old leader, Charles Kormi Kudzodzi – popularly known as Papa Hogbedetor has been at large following pursuits and clamp down of their activities by the police who say the group’s demand for secession violates the constitution of Ghana.