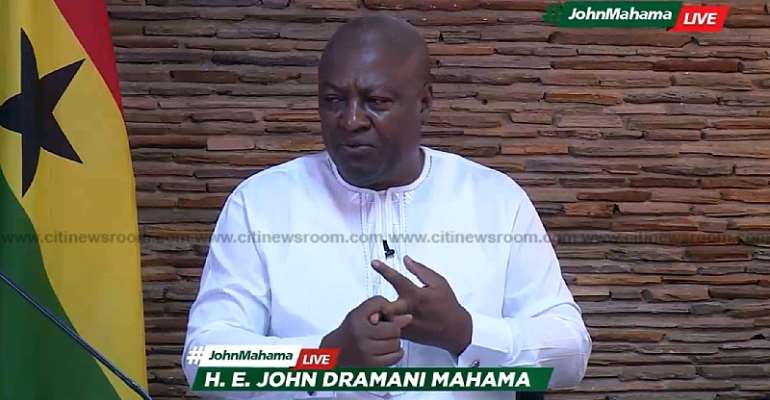 The flagbearer of the opposition National Democratic Congress (NDC), John Dramani Mahama, says if Ghanaians give him the nod in the 2020 election, he will ensure that projects started by the current Akufo-Addo government but were not completed are completed.

Addressing Ghanaians on Facebook on Monday, the former President indicated that when the National Democratic Congress came into office in 2008, they completed and co-commissioned all projects of former President John Kufuor and thus he was surprised that the current NPP government was not paying attention to projects left by his administration.

He, therefore, said that he would make it a point to continue what he started and complete all projects that would be left by the New Patriotic Party government.

“Article 6 of the Ghanaian Constitution called the directive principles of state policy enjoins every succeeding government to continue all the projects began by its predecessors and this has happened in the past. I remember when Professor [J.E.A.] Mills came into office, there were some projects President Kufuor was undertaking including the Bui dam and the N1 highway which were continued. And indeed when Prof. Mills was going to commission them, he invited former President Kufuor to come and sit next to him and they commissioned the N1 project”.

“The Bui dam got finished in my time and I knew that it was started in President Kufuor's time and so I invited President Kufuur to come and join me in commissioning it.  That is the kind of spirit we want to see in Ghana, we don't want the spirit where because one government was constructing community day schools, you abandon them all over the country,  because one government was building hospitals they have been abandoned all over and I have made a promise to the people of Ghana that as soon as I come we will take up the abandoned projects and finish them so that they can benefit the people of Ghana”.

Former President John Mahama has on several occasions accused the Akufo-Addo administration of abandoning many of the projects started during his tenure in office.

Government, in response to these concerns, indicated that it has put measures in place to complete such projects.

President Nana Akufo-Addo had assured he will complete existing projects but many have expressed fears that the government may abandon infrastructural projects commenced by the John Mahama government as it has its own plan.