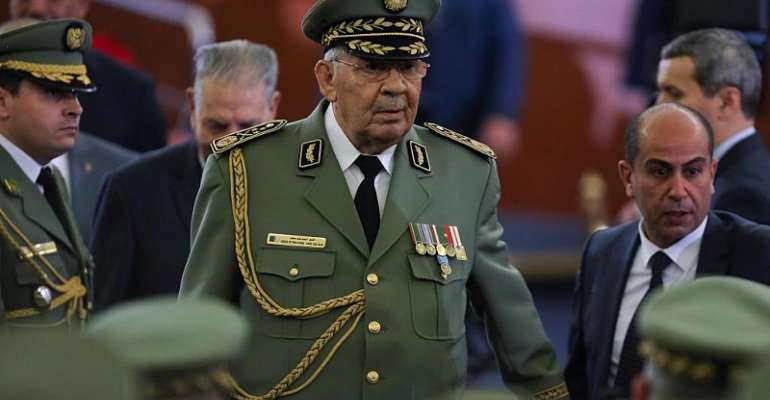 President Abdelmadjid Tebboune of Algeria announced three days of mourning on Monday following the death of army chief Ahmed Gaid Salah. The 79-year-old died at home from a heart attack less than a week after Tebboune was sworn in as the new leader.

But since his toppling, Salah's presence has meant the military's role has remained despite the mass Hirak movement demanding the establishment of a civilian government and the removal of all remnants of the Bouteflika regime.

Vacuum of power
Salah's death has left many fearing a new period of instability.

Salah was widely regarded as the real powerhouse after the departure of Bouteflika, Arthur Asseraf, a lecturer on the history of colonial Algeria at the University of Cambridge, told RFI.

“It's unclear whether this [death of Salah] will lead to a power vaccum,” said Asseraf. "The Algerian political system has long been characterised by a clique of several figures rather than just one strong man."

But others say while his death may be suspicious, given it took place so soon after Tebboune's swearing-in ceremony, his departure was expected.

“Ahmed Gaid Salah's erratic speeches and becoming a hated figure for the public meant his disposability was likely, and it was expected he'd be forced to retire shortly after the installation of a new head after Bouteflika,” Yasmina Allouche, an Algeria researcher with TRT, told RFI.

“While his death may be suspicious, the real focus is how the military's dynamics will change and what the implications will be for Algeria particularly in protecting its institutions,” she added.

In an effort to appease concerns, one retired general told Reuters that the “army hierarchy is unified and it will move on after Gaid Salah as it did before him. Algeria's army is a single block, not under the influence of one general but with consensus as its engine.”

But the combination of Tebboune's highly contested election, and the mass protests that continue across the country and Salah's sudden death has many searching for clarification on who is really in charge, noted Asseraf.

Temporary chief of army
In his place, Tebboune has named Said Chengriha as the country's acting army chief.

Chengriha is known to be a technical military man, who has been “actively engaged in the war against terrorist armed groups,” tweeted Zine Labidine Ghebouli, a political analyst with the Washington Institute for Near East Policy.

He noted that Chengriha has no clear political background.

But whatever the role Chengriha will carve out for himself, it comes at a crucial time for Algeria. The protests have continued week after week against the might of the military and against Tebboune.

With the death of Salah, it's likely that Algerians “are entering a new phase in the contest to define Algeria's future,” said Asseraf.

The fear of the unknown could be just what the Hirak movement needs to strengthen their movement.

“The popular movement is likely to be galvanized by this change and should push for more,” tweeted Dalia Ghanem, an Algerian political analyst and resident scholar at Carnegie Middle East.