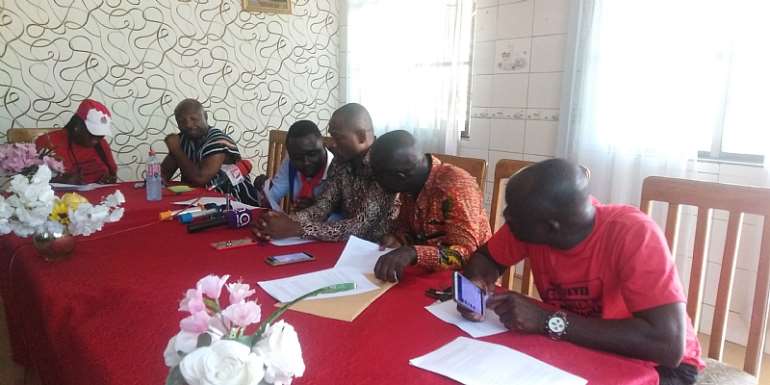 The Coalition of Aggrieved Customers of Menzgold (CACM) says it is calling on the public to disregard claims by the Gold-Dealership Firm saying the reverse payment of customers from September 2018 to 2013 is deceptive.

According to the Public Relation Officer (P.R.O), Francis Owusu, the payment schedule failed to outline timelines given.

Addressing the media in Accra, the P.R.O said “We want to place on record that Menzgold does not have customers from 2013 to 2017. This is because the longest life span of any investment in Menzgold is 12 months”

He added that the coalition has taken notice of the payment schedule and formula but have rejected it since it is discriminatory, non-transparent and failed to capture the demand of the entirety of customers.

He further mentioned that they do not see how the bleak plan is going to lead to the payment of our locked-up investment since the CEO failed to take the inputs of customers on board in the lead up to its outdooring.

He revealed that CACM leadership together with its Lawyer, Mr. Francis Xavier Sosu and Consultant, Mr Jacob Osei and other customer leaders already have a joint meeting adding it wishes to remind them of their pledge and understanding which both.

He, on behalf of the coalition, challenged the Management of Menzgold call for an immediate reconvening of a meeting to discuss the said payment plan.

He tasked the Management of the Gold Dealership Firm to pay the Coalition 100 % without delay before the end of December 31st 2019.

“On 10th September 2019, Chief Executive Officer (C.E.O) of Menzgold, Nana Appiah Mensah in a meeting indicated that he had enough liquid and assets to pay all customers and that he is not waiting for Dubai money. He told us of the discussion he has had at officialdom and the progress of that discussion which was meant to ensure that there is positive progress (80%) towards payment” he fumed

The Aggrieved Customers says they are confident the payment schedule is not transparent since no one till date nobody knows the "cash at hand" to start paying adding that it cannot guarantee the settlements of customers.

Mr Owusu revealed that CACM is guided by the episode of 2018 negotiation for 15% payment for 90 days across board which never materialized and was grossly abused.

He added that due to these occurrences, CACM earlier called on Government to set up a tripartite committee to assist in resolving the issue but their request has yielded no results.

The Aggrieved Customers noted that the total neglect by the state of its citizen who invested in a Ghanaian Company is mind-boggling.

It, however, threatened to petition the International Community on the attitude of both NAM1 and Government towards its citizens.

Speaking on the mechanism, he mentioned that the group cannot fathom with “reverse payment mechanism” adding that appearance of percentages on the plan creates suspicion of MG's type of investment model.

The P.R.O also disclosed that although Investment Firms such as Gold Man capital, Gold Coast Securities which had similar challenges, did not let the public know of its percentage hierarchical thing.

“It should not be lost on Mr. Nana Appiah Mensah that more than 29 customers have lost their lives due to shock as a result of locked-up investment. Others are down with stroke, bedridden with fatal illnesses. Still some have run out of legitimate homes because of being chased by debtors, some are in prison cells because of Menzgold” he stated

He noted that the ill-treatment meted out to the Aggrieved Customers was gross discrimination and does not make sense.

Mr. Owusu mentioned that their investments in Menzgold is not an endowment fund or revolving fund where it was treated on the basis supporting people adding that neither does the coalition know the Gold-Dealership as a charity organization.'

Mr. Owusu stated that C.E.O of Menzgold told the world, Kwame Akuffo and Co Unlimited will be responsible for determining payment, among others yet the law firm has dissociated itself from that arrangement.

The Customers says since Menzgold has done validation, it should be possible for them to know the exact numbers they are dealing with and compare them with the cash at hand and make payments across board