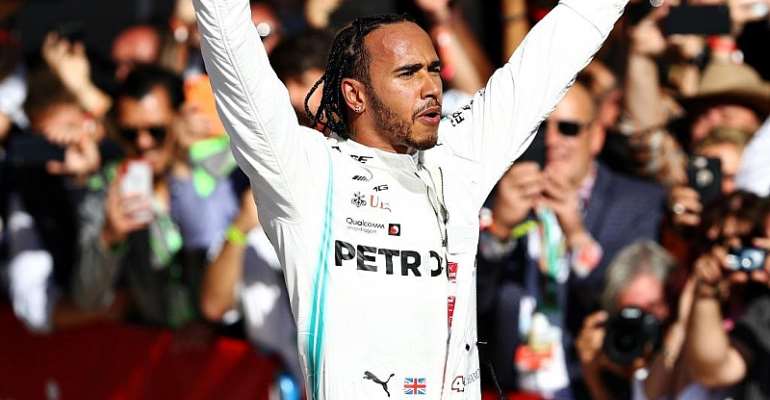 Glory for South Africa's men in the rugby world cup, despair for the conquered English. Ecstacy for England's cricketers, disappointment for their New Zealand opponents after 50 overs in the world cup final. Like many a year, 2019 offered enthralling stories of tears, cheers, redemption and regret.

The 33-year-old Spaniard claimed the accolade for the fifth time.

"I am super happy," he said as he hoisted the bauble denoting his achievement during the men's end of season championships in London. "After all the injuries that I went through in my career, I never thought that I would have this trophy at my age. It's something very emotional for me. A lot of work behind the scenes has gone into it."

On the women's circuit, there were four different winners of the Grand Slam tournaments in 2019 with Ashleigh Barty securing her first major at the French Open in June and Bianca Andreescu also lifting her first after thwarting Serena Williams at the US Open in September. Naomi Osaka and Simona Halep both won their second Grand Slal events at the Australian Open and Wimbledon respectively.

Liverpool boss Jurgen Klopp led Borussia Dortmund to the 2013 showdown where they were beaten by Bayern Munich.

But on 1 June, after six defeats in various cup finals, Klopp emerged a winner.

"Usually, I have to sit and explain how we lost the match," beamed Klopp. "This time I don't want to explain why we won it. I only want to enjoy that we won it. And all the rest is not important."

Try telling that to the fans, Jurgen.
Liverpool, with six wins, are the most successful English side in the 64 year history of European club football's most prestigious tournament.

Tally
Manchester United have three, Nottingham Forest won it twice under Brian Clough in 1979 and 1980 while Aston Villa boast a success back in 1982 and Chelsea fluked their way to the crown in 2012.

"I feel mostly relief to be honest," added Klopp. "Relief for my family because the last six cup finals we've always flown away on holiday with a runners-up medal which is not that cool."

An English club also won the Europa League. Chelsea beat London rivals Arsenal 4-1 in a final played in the Azerbaijan capital Baku. Not exactly a mutually convenient London Underground ride away from Stamford Bridge or the Emirates Stadium.

Still the Chelsea fans made the 4,000km trip back home in good spirits after witnessing a last Eden Hazard masterclass in blue. The Belgian maestro set up one goal and scored twice in what was his farewell performance before departing for Real Madrid and the hallowed pastures of the Santiago Bernabeu.

1,2,3 viva Algérie
In terms of continental glory in national teams, Algeria won the Africa Cup of Nations. It was their first success since 1990.

The competition was switched from Cameroon to Egypt because of political turmoil in the west African country and the lack of progress constructing the venues for the event which was parading 24 teams for the first time since its inception in 1957.

Hosts Egypt surprisingly lost in the last 16 to South Africa who in turn went down  to Nigeria in the quarters. Algeria, who looked the most solid of the squads during the group stages, rode their luck against Cote d'Ivoire in the last eight and were ultimately worthy winners.

"I'm very happy,” said Algeria coach Djamel Belmadi. “Our whole nation, our people were waiting for this second star for a long time. It's our first Cup of Nations won away from home. It's incredible especially when you look at where we came from.

"I took over a team that was really struggling. To do what we've been able to do, and to put ourselves on the top of Africa in 10 months, is extraordinary.”

The United States women's team kept themselves on the top of the planet with a 2-0 defeat of the Netherlands in the World Cup final in July. That made it back-to-back titles for coach Jill Ellis and a fourth overall.

As well as being joint top scorer, Megan Rapinoe was voted best player of the tournament and she won the women's Ballon d'Or in December.

The 34-year-old Briton's Mercedes powered to 11 victories in the 21 races of the season.

He won six of the first eight grand prix and came second in the other two. At the end of all the racing, he had 413 points, 87 more than stablemate Valtteri Bottas who was second.

"For example Fangio would win races by 10, 12 sometimes 30 seconds," said motor sports author Maurice Hamilton. "Today if you win by five or six seconds,  that's considered to be very good. It's difficult to say one driver was better than the other, all you can say is that they were the top men of their respective eras. Fangio certainly was and Hamilton has been doing things with the car that you didn't expect."