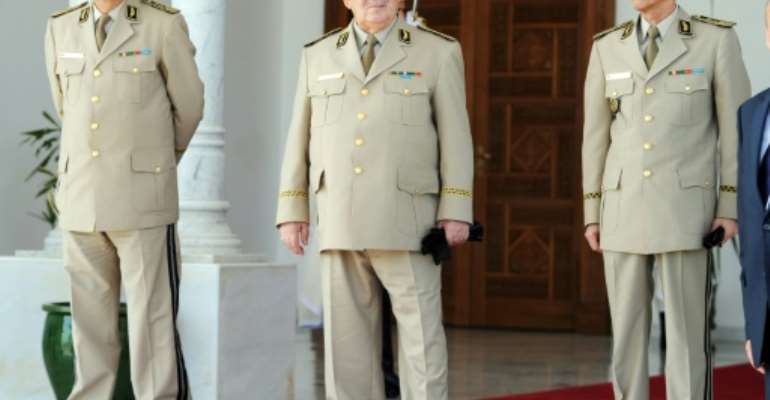 His death at age 79, announced by state television on Monday, threatened to deepen Algeria's political crisis at the end of a turbulent year.

Many saw the general, a veteran of Algeria's war for independence from France, as the guardian of the system in power ever since.

When Bouteflika appointed him in 2004 to head the armed forces, the backbone of Algeria's opaque regime, he became one of the North African country's most powerful men.

For years, Gaid Salah unwaveringly supported Bouteflika, even backing the octogenarian's unpopular bid early this year for a fifth term in office -- the announcement that sparked unprecedented mass demonstrations.

In early April, Gaid Salah called on his boss to resign; Bouteflika quit the same day.

That left the army chief effectively in control of the country. 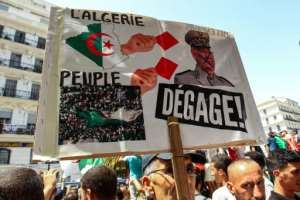 Algerian protesters who once praised Gaid Salah for his intervention to force Bouteflika's resignation went on to despise the general. By - (AFP/File)

Born in 1940 in Batna region, some 300 kilometres (190 miles) southwest of Algiers, Gaid Salah has spent more than six decades in the armed forces.

At the age of 17, he joined Algeria's National Liberation Army in its gruelling eight-year war against French colonial forces.

When the country won independence in 1962 after 132 years as a French colony, he joined the army, attended a Soviet military academy and rose through the ranks.

Gaining a reputation for a hot temper, he commanded several regions before becoming chief of Algeria's land forces at the height of a decade-long civil war pitting the regime against Islamist insurgents.

In 2004, as he hit retirement age, he was picked by Bouteflika to replace overall chief of staff Mohamed Lamari, who had opposed the president's quest for a second mandate.

Today, the DRS is defanged, Bouteflika is off the scene and many of his allies, including his formerly powerful brother, are being prosecuted for graft as part of investigations encouraged by Gaid Salah.

He exercised considerable influence over the justice department and the civilian administration of interim president Abdelkader Bensalah.

He was also seen as close to new president Abdelmadjid Tebboune, who took office last week following a vote bitterly opposed by protesters.

But protesters, who initially praised him for his intervention to force Bouteflika's resignation, began to despise the general.

He had categorially rejected their key demands of deep reforms, the establishment of transitional institutions and the dismantling of the military-dominated regime.

Indeed, he made virtually no concessions, and was the driving force behind a highly controversial December 12 election that brought Tebboune to power.

The poll was widely rejected by protesters, who argued no vote could be valid until regime figures had left office and reforms carried out.

Moussaab Hammoudi of the School for Advanced Studies in the Social Sciences in Paris said weeks before Gaid Salah's death that he was "not a great strategist."

"He acts like a brutal soldier," he said. "For him, Algeria is a huge barracks, and making a concession is a weakness."