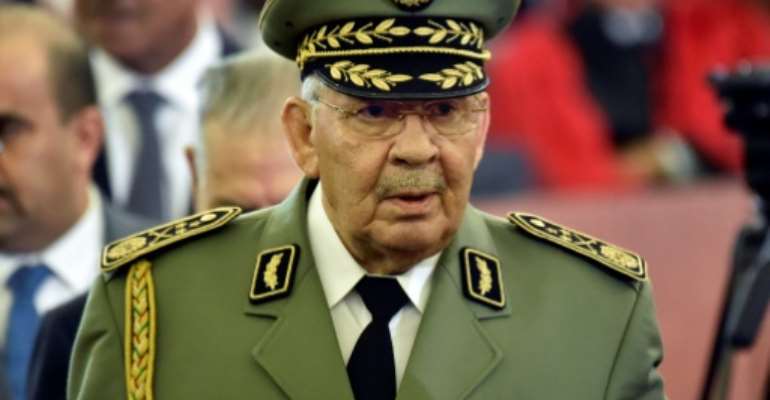 Ahmed Gaid Salah was a veteran of Algeria's war for independence from France. By RYAD KRAMDI (AFP/File)

Algeria's powerful army chief General Ahmed Gaid Salah has died, state television reported Monday, without giving details on the cause of his death.

Gaid Salah, 79, was seen as Algeria's de facto strongman following the April resignation of longtime president Abdelaziz Bouteflika in the face of massive protests against his bid for a fifth term.

The lifelong military man played a key role pushing through December 12 presidential elections for Bouteflika's replacement, defying a months-long protest movement that has demanded deep-rooted political reforms before any poll.

As chief of Algeria's military for a record 15 years and a veteran of Algeria's war for independence, the general was seen as the guardian of the military-dominated system that has been in power since.

He had supported Bouteflika for years until the president's February announcement that he would run for re-election sparked unprecedented demonstrations.

In early April, Gaid Salah called on his boss to resign. Bouteflika quit the same day, leaving the armed forces chief effectively in charge of the North African country.

Gaid Salah defied protesters by pressing on with a presidential vote on December 12. It was won by establishment insider Abdelmadjid Tebboune who was seen as close to the armed forces chief.

The army chief had categorially rejected the youth-led protest movement's key demands: deep reforms, the establishment of transitional institutions and the dismantling of the military-dominated regime.