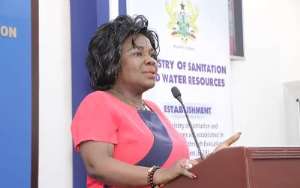 Ministry of Sanitation and Water Resources is set to decommission landfill sites across the country, beginning next year.

The sector Minister, Mrs Cecilia Abena Dapaah, who made this known at the eighth National Development Forum in Accra last Thursday, said some of the major landfills in Accra and Kumasi would be decommissioned in 2020 to allow for engineering works to green the sites and turn them into parks.

"In 2020, one of the things we will focus on is to get our landfills engineered. That means they will be decommissioned, greened and turned into parks," she added.

The forum, which was organised by the National Development Planning Commission (NDPC), brought together stakeholders in the public and private sectors to discuss the “Sustainable Management of Ghana's Sanitation”.

Last week, Mrs Dapaah told journalists at a media briefing that Cabinet had given approval for the engineering and construction of modern fit-for-purpose landfill sites in Accra and Kumasi.

It is expected that these modern sites will cater for the permanent disposal of solid waste in the two cities, when engineering works begin on the old sites.

Open defecation
Another priority of the ministry next year is to ensure the total eradication of open defecation by providing toilet facilities for deprived households.

"Two thousand units of toilet facilities consisting latrines and water closets have been provided to households and we will continue to provide them," Mrs Dapaah said.

She said through such efforts by the government, 3,000 communities across the country had been declared open defecation-free.

Sanitation agency
A former President of the Ghana Institution of Engineers, Mr Steve Anoff Amoaning-Yankson, said the government must establish a national sanitation agency to take care of the engineering component of sanitation.

He said such an agency must be responsible for the management of liquid, solid waste and drainage.

“The government must also engage the Ministry of Health to discuss issues related to the health component of sanitation and establish a parallel sanitation agency to institute effective management procedures,” he added.

Financing
For his part, the Chief Executive Officer of the Accra Metropolitan Assembly, Mr Mohammed Adjei Sowah, said there was the need to develop a working mechanism to finance sanitation in the country.

He said although the government was implementing policies aimed at addressing sanitation related challenges, it was prudent to have a clear-cut policy on how to drive investments into the sector.

“Just as we have the Free Senior High School, it is important for us to also find money to fund sanitation if we find it important,” Mr Sowah said.