Give Me 4 more Years – Prez Akufo-Addo Appeals To Ghanaians 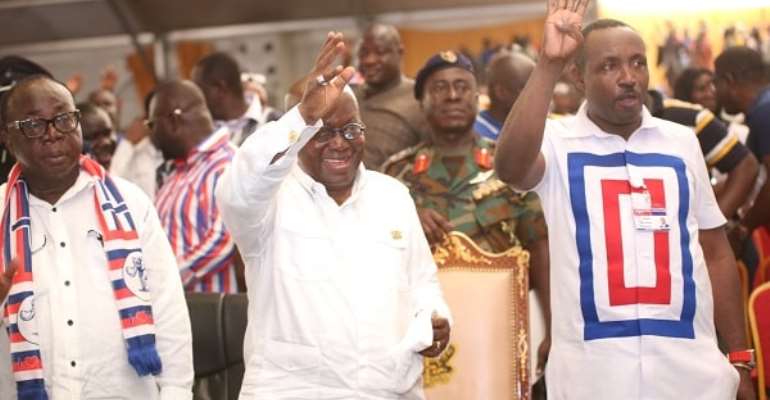 President Akufo-Addo has appealed to Ghanaians to give him four more years to enable him to continue ruling the country.

Addressing a large crowd of New Patriotic Party (NPP) supporters at the forecourt of the Ghana International Trade Fair Centre in Accra to climax the national delegates conference of the party on Sunday, the President said three years of his administration had seen a lot of developments, for which reason he was hopeful that Ghanaians would retain the NPP in power, come 2020.

The conference was attended by about 6,500 delegates from Ghana and the Diasporan NPP community, including former President John Agyekum Kufuor, Vice-President Mahamudu Bawumia and the National Chairman of the NPP, Mr Freddie Blay.

Others at the conference were national party executives, Members of Parliament and representatives of some opposition political parties.

Swipe at NDC
Clad in white apparel, President Akufo-Addo took a swipe at the erstwhile National Democratic Congress (NDC) administration for claiming that it undertook unprecedented road construction in the country when the facts on the ground were to the contrary.

Surprisingly, according to him, anywhere he had visited, the first request from the chiefs and the people had been road construction.

He recalled that in 2016 when he complained about the poor state of roads in the country, the NDC said he could not see the roads it had constructed because he (Akufo-Addo) had been sleeping in his car.

Assurance
He gave an assurance that he would undertake projects that Ghanaians would see, saying that although he would not be able to fix the entire road needs of the country, he would also not lie about what he had not done, adding that unlike the NDC that put nonexistent infrastructure in its Green Book, he would not do so.

Free SHS
On the free SHS, the President cautioned Ghanaians not to make the mistake of bringing back the NDC, led by former President John Mahama, because that party would abolish the policy which had benefitted many many Ghanaians.

He said from the first day he started talking about the need for free SHS, the NDC doubted his capabilities to introduce and implement it.

He said the NDC gave various reasons free SHS was not possible, including lack of funds, but the NPP had proved that party wrong.

President Akufo-Addo said the NDC said the country would be ready for free SHS only in 20 years, which again had been shot down by the NPP.

On the NDC’s decision to review the implementation of the free SHS, he declared: “There is no policy like review”, adding that the NDC’s review policy meant the abolition of the concept.

On the Planting for Food and Jobs programme, the President said through the programme, food products were in abundance and their prices had witnessed a reduction.

Bawumia on economy
Earlier at the conference, Dr Bawumia had stated that the Akufo-Addo administration took over a tattered economy from the NDC and had transformed it into an emerging market economy.

He recounted the programmes, policies and achievements of the government under the leadership of President Akufo-Addo from January 2017 till now and said Ghana under former President Mahama was mismanaged.

The mismanagement, he explained, resulted in high interest rates, a weak banking system, rising import rates, four years of power outage and a 45 per cent average increase in electricity tariffs, while the country’s finances were in a precarious state, with high taxes all over, including the taxing of condoms.

Dr Bawumia said the NPP government took over a heavily indebted poor country (HIPC) economy but, by dint of hard work, it had transformed it into an emerging market economy.

He added that aside from putting the economy in shape, the NPP was also working to reduce the suffering of the people, as well as transform the country into a modern economy.

While touting the performance and achievements of the President Akufo-Addo government, the Vice-President said Ghana was now one of the fastest growing economies in the world because the government had worked to restore economic growth.

He said the negative growth in the industrial sector had been turned into a positive one, while interest rates were also on the decline, with an improved current account balance.

With respect to the annual average depreciation of the cedi, Dr Bawumia said the NPP government had performed better with an 8.7 per cent depreciation, compared to the NDC’s 18 per cent.

Party primaries
The General Secretary of the NPP, Mr John Boadu, described the election of parliamentary aspirants for the party’s orphaned constituencies as very peaceful and assured the gathering that the primaries that would be held in constituencies with sitting MPs in April 2020 would also be successful.

He gave an assurance that the concerns raised by the Majority Leader, Mr Osei Kyei-Mensah-Bonsu, for a second look to be taken at how the contest was organised in constituencies with sitting MPs would be considered, with best practices in mind.