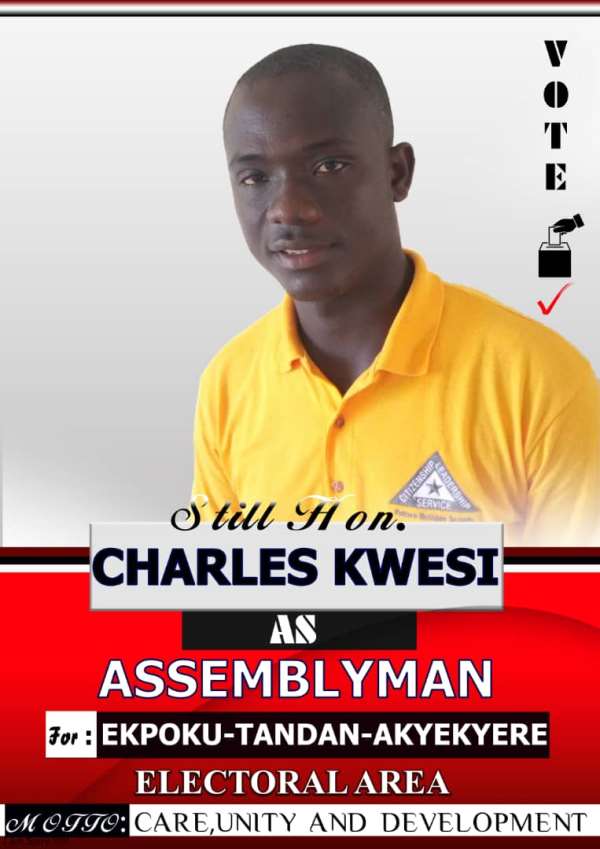 The elected Assembly Member for Tandan Electoral Area in Ellembelle District of Western Region, Hon. Charles Kwesi has pledged his total commitment to construct a library for students in the area.

He made the promise shortly after securing a slim margin victory in the just ended District Level and Unit Committee Elections held on Tuesday across the country.

A total number of 1,430 registered voters were expected to exercise their franchise, but 790 turnout to vote.

In the Unit Committee Elections, seven candidates contested and at the end of the day, five candidates were selected.

Before his current victory, he had served as their Assembly Member from 2015 to 2019.

Speaking to this reporter after his victory, Hon. Charles Kwesi thanked Almighty God for the victory.

He also thanked the electorates for the confidence reposed in him to serve the Electoral Area for the second term.

He therefore promised to liaise with the newly elected Unit Committee Members to develop the Electoral Area.

Apart from promising to construct a library, he also promised to give scholarships to brilliant but needy students to further their education.

He said he would continue to organise free extra classes for school children in the area.

Hon. Charles Kwesi who is being recognised as development-oriented Assembly Member seized the opportunity to announce that he would complete a CHPS compound in the area, with the objective of subsequently converting it to Community Clinic.

He revealed that his health program dubbed "All Must Get NHIS Cards" would be continued.

He also pledged his commitment to assist the teeming unemployed youth to get job opportunities by providing the necessary information concerning job advertisements.

"Much information will be given to the youth concerning jobs availability such as police, military, carpentry, hairdressing among others", he stated.

He added that he would get the community a new football pitch for the people to have their games on it.

Under security, he announced that he would provide street fibre light during the celebration of Christmas.

Under sanitation, he promised to maintain the Community Water System to provide regular water supply to the residents.

He therefore concluded his victory speech by revealing why he was re-elected as their Assembly Member.

He said he won the elections based on competence, obedience, patience, respect among others and therefore promised to maintain the cordial relationship existing between him and the entire community.

According to the Electoral Officer for Ellembelle District, Mr. Emmanuel Aidoo, 327 candidates contested for the District Level and Unit Committee Elections in the area within the 36 Electoral Areas.