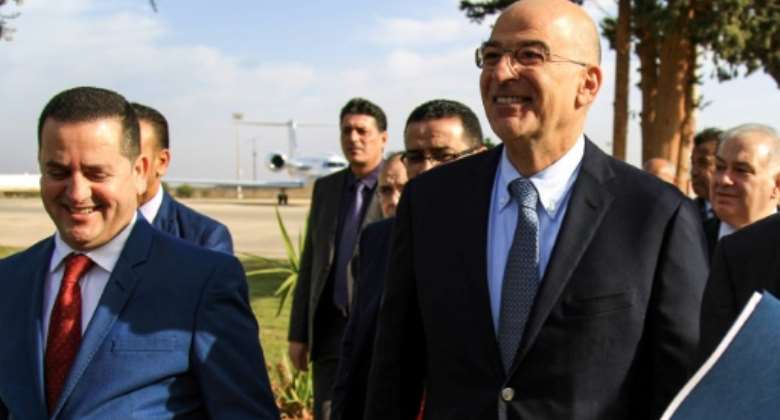 The agreement signed last month expands Turkey's claims over a large gas-rich area of the Mediterranean Sea and has been denounced by Greece, Egypt and Cyprus.

Libya is split between bitterly opposed administrations in the east and west. Since April, forces loyal to Haftar have been fighting to seize the capital Tripoli.

In November, the Tripoli-based UN-recognised Government of National Accord (GNA) signed the controversial maritime delimitation deal with Ankara, alongside a military cooperation agreement.

After the talks in Libya, Dendias (L) flew to Cairo, where he met his Egyptian counterpart Sameh Shoukry. By - (Egytian Foreign Ministry/AFP)

Athens says the maritime deal violates international law and the sovereign rights of Greece and other states, and urged the United Nations to condemn it as "disruptive" to regional peace and stability.

Dendias said Haftar agreed with Greece on the "absolute nullity of these memoranda and how harmful they are" to Libya and regional stability.

GNA Foreign Minister Mohamad Tahar Siala slammed the meeting in a statement, saying it was "a flagrant violation of decisions by the UN, the UN Security Council and all regional organisations... all of which stipulate that the GNA is the only legitimate government" in Libya.

After the talks in Libya, Dendias flew to Cairo, where he met his Egyptian counterpart Sameh Shoukry for discussions aimed at unifying opposition to the maritime deal.

"We will not allow anyone to control Libya... it is a matter of Egyptian national security," Sisi told reporters, referring to the military cooperation deal struck between Ankara and the GNA.

From Cairo, Dendias set off for Cyprus, where he met with Foreign Minister Nikos Christodoulides, officials said.

"The condemnation of the Turkish actions is unanimous by all our allies and partners and this is our most powerful diplomatic weapon," Dendias told the Greek weekly Real News on Sunday.

Analysts have said Turkey's recent rapprochement with Libya is aimed at preserving access to gas supplies following the recent discovery of vast reserves in the Mediterranean that has triggered an exploration scramble between adjacent states and international oil companies.

It also comes as energy ministers from Cyprus, Greece, Egypt, Israel, Jordan, Italy and the Palestinian territories agreed earlier this year to create the "East Mediterranean Gas Forum" without Turkey.

"Turkey fears that it is being boxed in from its southern flank, faced with plans for a future gas pipeline to link Cypriot gas fields with European markets," Ege Seckin, analyst at IHS Markit, told AFP earlier this month.

"The maritime boundaries drawn under the deal cover an area that reaches from southwest Turkey to northeast Libya, cutting across the planned route for this pipeline," he said.

The Greek government meanwhile announced on Sunday it will sign an agreement for a huge EastMed pipeline project with Cyprus and Israel on January 2.

The 2,000-kilometre (1,200-mile) pipeline would move between nine and 12 billion cubic metres of gas a year from offshore reserves between Israel and Cyprus to Greece and then on to Italy and other southeastern European countries.

The project is expected to make Cyprus, Greece and Israel key links in Europe's energy supply chain and aims to stymie Turkey's effort to extend its control in the eastern Mediterranean.

Greece is pursuing its own agreements with countries including Egypt and Italy to delineate their maritime boundaries.

"We will evaluate all kinds of military support, including ground, marine and air options if necessary," he said.

Although Erdogan has said Turkey is willing to send troops to Libya, the government must seek a separate mandate from the Turkish parliament to send forces to fight there.