End of CFA franc in West Africa only a ‘symbolic change’: economist 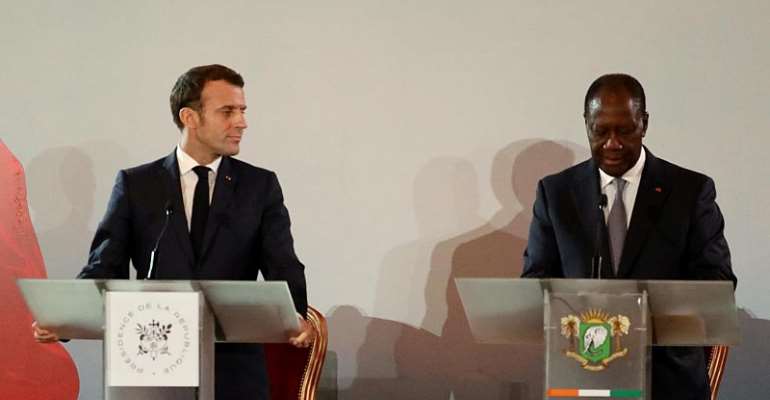 Cote d'Ivoire's President Alassane Ouattara has announced the official end of the French-backed regional common currency for the eight countries in West Africa, as French President Emmanuel Macron was on hand in Abidjan to hail the “historic reform.”

The CFA will undergo three major changes, according to Ivorian President Alassane Ouattara: one, the name will change to Eco in 2020, France, would not be governing the management of the common currency, and ultimately, Cote d'Ivoire and the seven other countries that use it would “stop holding 50 percent of the reserves in the French Treasury.”

France's President Emmanuel Macron, who jointly announced the end of the CFA franc in Abidjan on Saturday, said that this move was made in order to end Françafrique monetary ties.

No other country “shares the language, the culture and the dream of Cote d'Ivoire and the African continent like France does. None,” said Macron at the conference announcing the change.

“But too often today, France is literally perceived in terms of domination and the trappings of colonialism that did exist. Which was a profound error. A fault of the French Republic,” he added.

On paper, these changes are seemingly positive, says Ndongo Samba Sylla, Dakar-based economist and co-author of the book, “Françafrique's Invisible Weapon: Story of the CFA Franc.” But he says that these are only symbolic aspects of the neocolonial currency.

“As an economist, for me, the CFA franc is more than a symbol of the monetary system, which is designed to organise African countries in a way that treats the interest of French businesses, French government and more generally European businesses,” he tells RFI.

Other economic news to emerge from Macron's visit is that French Finance Minister Bruno Le Maire signed a new monetary cooperation agreement with the West African Monetary Union (WAMU), that includes the same French monetary guarantees as before, says Sylla.

“That means this neo-colonial link is still there… there should no longer be any monetary cooperation agreement between France and African countries,” he says.

In an interview with RFI in Abidjan, Le Maire said that the member states would be able to decide what they wanted to do with their money, and that this guarantee would only be a last resort.

“You should know that France will stand alongside the member states of the area if there is a crisis,” says Le Maire. “It's just a guarantee, and a new stability guarantee that is brought in, but it's a guarantee of last resort that will only be used, and only if, there is a financial crisis,” he adds.

The monetary guarantee means that CFA francs have an unlimited convertibility into euros. Inter-zone transfers will also be facilitated.

But Sylla says that if countries that formerly used the CFA encounter financial problems, France will not bail them out -- the countries will be referred to the International Monetary Fund (IMF), essentially creating a new partnership that is not mutually beneficial.

The CFA had been tied to the euro for some 20 years, but was originally instituted in 1945, one of the vestiges of 'France-Afrique'. "The new eco system is essentially a 'copy-paste' version of the Maastricht Treaty that established the euro and the Eurozone", says Sylla, which is problematic because West African economies are very different from each other, but most rely on the export of raw materials, which makes the market very volatile.

Issues for Eco rollout in 2020
The regional body that the eight CFA countries belong to, the Economic Community of West African States (ECOWAS), has lauded the change, encouraging the 15-member bloc to roll out a common currency for West Africa.

Earlier this month, Nigerian Finance Minister Zainab Ahmed said that only Togo was on track to meet all the financial requirements for the Eco zone.

“What is interesting is that now, the CFA franc countries, the eight countries in West Africa, are now launching the Eco next year when seven of them do not meet the criteria,” says Sylla.

“So that means that all the logistics behind the criteria…is somehow jeopardised. They don't even respect what they agreed on to launch the Eco. So for me, this is a diplomatic way of saying that this project is dead,” he adds.