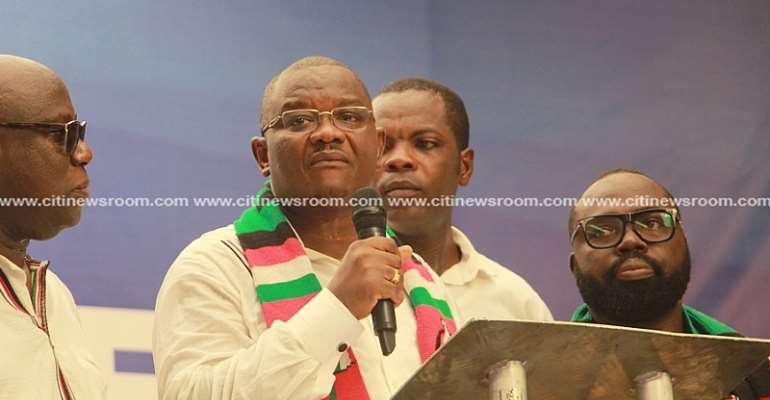 On a sarcastic note, the opposition party praised the NPP for being bold enough to hold the Delegates Conference at a time Ghanaians were “suffering”.

“We salute the NPP for the courage to hold a national Delegates conference during this Christmas season when the sentiment of most Ghanaians is that of a “sakora” Christmas.”

The message was delivered by Sylvester Mensah, one of the NDC's failed flagbearer aspirants, who was flanked by executives of the NDC.

The message started with a call for peace with Mr. Mensah stressing that the NDC did not wish failure on the NPP.

“Our politics should be a reason to take this country forward, and not a reason to tear it apart. Our ideologies, policies and approaches may be different but that is the beauty of political pluralism.”

But NDC said the NPP government had not shown enough goodwill in the way it had handled national affairs.

Mr. Mensah cited the handling of the banking crisis and lack of tolerance from the government and the “deliberate harassment of [the NDC] National Chairman.”

“Regrettably Mr. Chairman, we have witnessed policies and regulatory interventions that have had dire consequences on skilled staff and customers of financial institutions. We have witnessed the mass existing of Ghanaians from jobs in the public sector just because they profess political philosophies other than yours.”

Mr. Mensah also said “press freedom is under siege” because of the closure of some media houses with NDC leanings.

The party bemoaned that all these “undermine tolerance and freedom of expression… There are no attributes of peace and goodwill in this.”

“The NDC is also closely monitoring and observing the deliberate harassment of its National Chairman, Honourable Ofosu Ampofo,” he added.