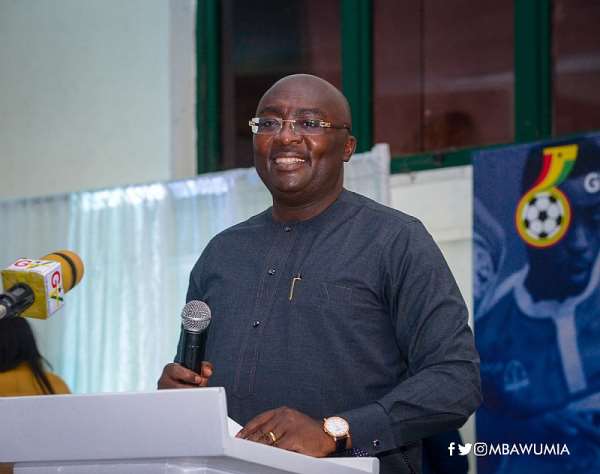 The Vice President, Dr Mahamudu Bawumia, has launched a new season of organised football in Ghana after nearly two years of no action.

The launch of the new season, which begins on December 27, comes in the wake of a drawn-out but eventually successful process to reform and re-organise Ghana football after a major scandal in June 2018, which led to the dissolution of the Ghana Football Association (GFA), constitution of a FIFA and Government-backed Normalisation Committee, and the election of new leadership for the GFA in October, 2019.

Launching the 2019/2020 football season the Vice President, who is a self-confessed football fan, expressed his delight at the return of football, saying “As a passionate football fan, just as many Ghanaians, I was truly worried about the state of our football and the uncertain future it faced. But thanks to the President, Nana Addo Dankwa Akufo-Addo, and the support of FIFA, we were able to set a clear path for the revival and restructuring of Ghana football.

“The absence of an organised league in the country for nearly two years had its dire socio-economic consequences to everyone connected to the league. Many livelihoods, especially footballers, coaches and vendors who sell at the various stadia on match days, depend largely on football for survival, and I can only imagine the difficulties some of these people went through when their main source of livelihood.”

The Vice President urged officials in charge of Ghana sports, especially club owners and administrators, to embrace digitisation and explore the benefits it can bring to the development of sports.

“One important thing both the GFA and the clubs should embrace in this era of digitisation is the paperless system this Government is championing. The paperless system should not only be synonymous with business or banking transactions because its enormous benefits can extend to football clubs as well.

“Fans of Ghanaian clubs, especially the young ones who are exposed to easy access to information from their European clubs, should not struggle to access information from their local clubs, as well as buy club paraphernalia. Adopting the paperless system and going digital will greatly enhance the relationship between fans and their local football clubs because digitisation will bring the fans closer to the club.

“The paperless system should be the way for our clubs because to go paperless is to digitise, and to digitise is to monetise.”

Government, Vice President Bawumia indicated, is doing its part by developing and maintaining sports infrastructure, including the construction of several modern community mini stadia, and 10 multi-purpose sports complexes across the country.

He challenged the new leadership of the GFA to ensure that the various league competitions are not bedevilled by the kinds of developments which contributed in keeping people away from the leagues.

“If the GFA and football is to win back the confidence and trust of the people, some of these negatives which derailed the progress of the league should be curbed. It is refreshing and commendable to note that the GFA have taken steps towards repairing some of these defects of the league by organising series of workshops for key stakeholders including an integrity seminar for referees.”

The new President of the GFA, Kurt E.S. Okraku, announced a raft of incentive packages for clubs, coaches, and deserving players at all levels, including cash and attachment opportunities abroad.