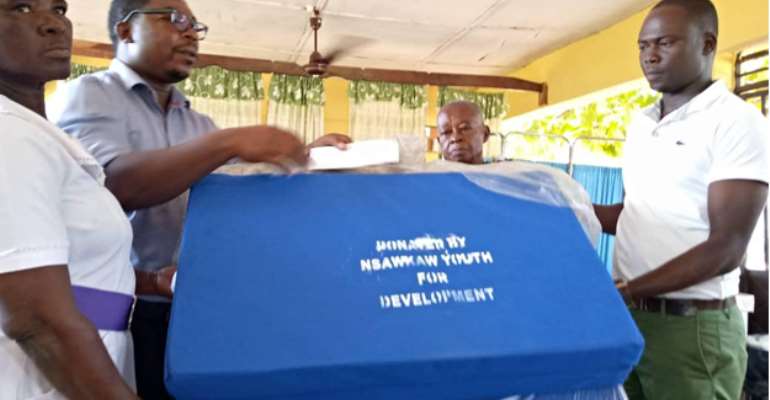 The Nsawkaw Youth for Development Association has presented Ten (10) mattresses to the Nsawkaw District Hospital to help solve the no bed syndrome at the hospital.

At a brief ceremony to hand over the items to the facility, Mr. Oppong Tua Barimayena, the president of the Association said the Association had the welfare of the hospital at heart as it served the entire district.

He said the donation would help to solve the No bed syndrome at the Hospital and to also deal with the situation where patients on admission had to sleep on the floors.

He assured of the Association’s continues support in bringing quality healthcare to the people of the district and facilitate the development of Nsawkaw and the district as a whole.

Mr. Oppong Tua Bariyena advised the hospital authorities to put items to effective use for the benefit of patients who visited the hospital.

Dr. Emmanuel Addinkra, the Medical Superintendent of the hospital received the donation on behalf of management and staff of the hospital and expressed gratitude to the members of the Association for their support, saying it has brought relief to the hospital.

He gave the assurance that they would put them in good use for the benefit all who visited the facility.

Nana Effah Gyan Sanaahene of Nsawkaw Traditional Council who also double as the chairman for the District health committee thanked the Association for their gesture and called other organizations to emulate same to compliment government effort.