Law Students Vex Over Suit Against AG, GLC Pushed To 2020 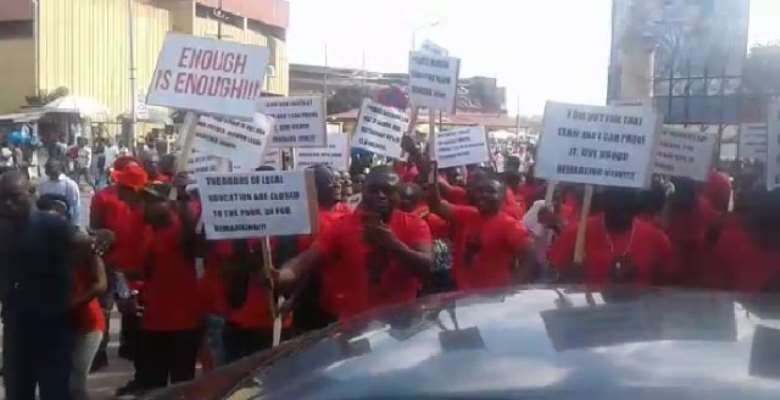 The law students took to the streets to protest the results in October this year.

A suit brought against the Attorney-General (A-G) and the General Legal Council (GLC) by a group of law students has been adjourned to January 2020 because the registry of an Accra High Court failed to assign the case to a judge.

The case, ‘Ganaku & ORS. V General Legal Council and Attorney-General’ concerns the controversial results of the entrance exams of the Ghana School of Law and was scheduled for hearing on Friday, December 20, 2019.

Applicants said they arrived at the Human Rights Court only to learn that the case was not in the system.

The students say at about 8:00 am Friday, they went to the Accra High Court for a scheduled hearing, but after consulting the court clerk concerning the courtroom where the hearing was to take place, they were informed that “the case was not in the system.”

Recounting the turn of events in a short release, the applicants gave the following account:

“On the advice of the court clerk, the applicants proceeded to the Court Registry for further enquiries.

“At the Court Registry, the applicants were informed that the application had indeed been filed on 12th December 2019, but “they [Court registry] had forgotten to scan it and assign it to a judge.”

“While some applicants stayed at the court registry and demanded the anomaly be corrected, others went back to the Human Rights Court to ensure the clerk facilitated the hearing of the application.

“The clerk initiated the process of assigning the case. However, the clerk later announced that the judge at the Human Rights Court to hear the application 'was indisposed'.”

The reliefs being sought by the applicants include the following:

1. A declaration that the undertaking imposed by the General Legal Council (GLC) on the Applicants to accept without question its decision in respect of the published results of the examination organized on July 26, 2019, as final is arbitrary, unlawful and void.

2. A declaration that the failure, refusal or neglect of the GLC to publish a procedure for remarking the examination papers of the Applicants is arbitrary, unlawful and void.

3. An order directed at the GLC to publish the procedure for remarking the exam papers of the Applicants within 7 days.

The mass examination failure at the Ghana School of Law this year kicked started a series of agitations among the students.

Out of the 1,820 students who took the examinations to enable them to enter the law school, only 128 passed. The results follow a similar outcome in 2018.

Before heading to the court, the students petitioned Parliament over the recurrent poor results among other issues.

It's 'regrettable' Akufo-Addo gov't, BoG 'puppets' chose to ...
7 minutes ago

Galamsey: We have to win the fight to protect our heritage -...
31 minutes ago