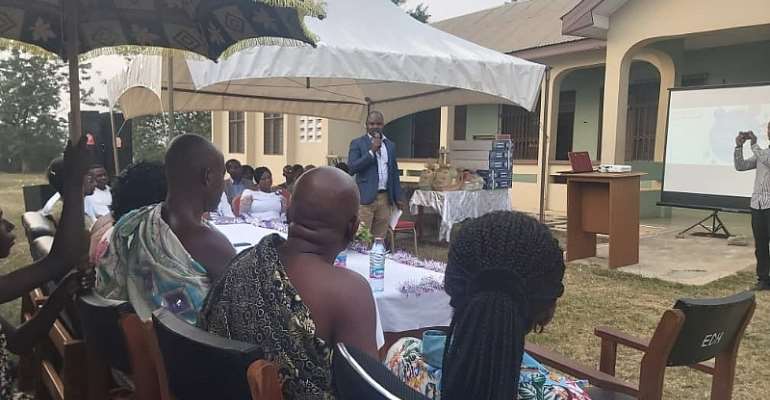 The District Health Directorate under the leadership of, Mr. Justice Ofori Amoah (District Director of Health Service) awarded health workers who have worked in the district and are still serving effectively and efficiently especially in the remote communities.

There are eleven (11) health facilities in the District with twenty six (26) CHPS zones and 83 Child Welfare Clinics Outreach points with a total workforce of about 840 from both private, mission and public sector providing quality healthcare to about 75,858 people.

Mr. Ofori Amoah stated that the objective of the awards is to motivate deserving health workers who have worked relentlessly with obvious sense of honesty, diligent and commitment especially in the remote communities by enticing them to stay in the district. The awards were

The District Chief Executive (D.C.E), Hon Mary Boatemaa thanked the organizers of the event and all members who showed up. She expressed her appreciation and deep gratitude to all health workers whose effort cannot be overemphasized. Hon. Mary Boatemaa was elated about development in the district of which the health sector has immensely contributed. She addressed that it is in their plans to build an ultra-modern maternity facility for Effiduasi District Hospital to improve maternal health care. To the award winners, she thanked them for their commitment, professionalism and the desire to serve humanities.

Nana Ohene Asiedu also advised workers to exhibit good attitude towards work. He cautioned awardees that they should not sit back and relax but need to raise the bar higher. He further emphasized on bad attitudes on the part of some health workers whose sincerity and commitment towards work is highly appalling and detestable. On that note, he advised that health workers with such ill-character to turn a new leaf.

The District Director of Health Service, Mr. Justice Ofori Amoah was greatly impressed of the presence of dignitaries and officials who graced the occasion. He expressed his gratefulness to all health workers who have contributed immensely to the health needs of our society. He congratulated the best workers especially Rosemary Delali Gavor, a midwife of Motokurodua CHPS for doing a yeoman’s job in spite of resource constraints and addressing that everyone deserves credit for their input.

He urged all other health workers to perform their duties in a loyal, valiant, useful and workmanlike manner especially to improve the healthcare delivery in the District.