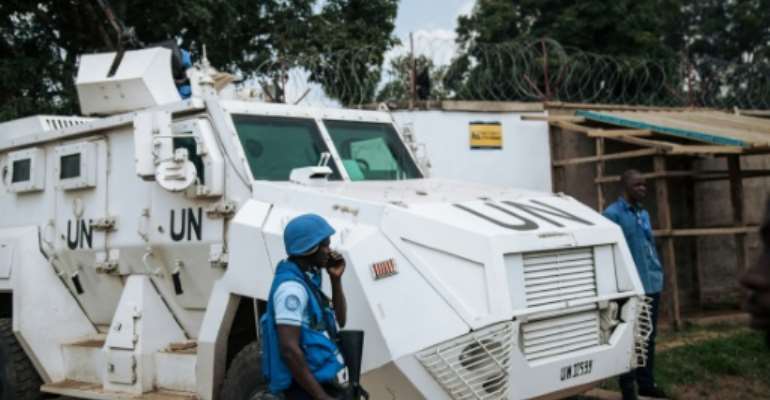 The UN has had a peacekeeping force in DR Congo since 1999. By ALEXIS HUGUET (AFP)

Politicians in Democratic Republic of Congo have long pressed the UN to cut its huge mission in the country, but now that a drawdown has begun, questions are being raised about the impact on locally-hired employees.

Since July 1, the UN Organisation Stabilisation Mission in the DR Congo (MONUSCO) has closed several bases and cut its civilian payroll by 764 workers.

A new mandate passed on Thursday by the Security Council gave the green light to a one-year extension for MONUSCO -- the UN's largest peacekeeping force, with a budget of around $1 billion dollars (901 million euros).

But it also reduced the number of soldiers in the mission while increasing the size of its police contingent, and stressed "the need to progressively transfer MONUSCO's tasks to the Government of the DRC."

President Felix Tshisekedi, in his state-of-the-nation address last week, paid tribute to the role of UN peacekeepers in the volatile country but said "MONUSCO has no calling to remain in the DRC indefinitely."

The new troop reduction is modest in relation to the 15,900 currently deployed, cutting the maximum authorized ceiling from 16,875 to 14,660. The police component will temporarily gain 360 additional personnel.

The drawdown has coincided with recent anti-UN protests in eastern DRC, where crowds accused the peacekeepers of failing to protect them against a brutal militia, the Allied Democratic Forces (ADF).

About 1,000 expatriates hold civilian posts, but three-quarters of the staff who lost their jobs this year were local-hired Congolese, leading to numerous complaints about the conditions of dismissal.

"They did it hastily, with no objectivity or openness," said Rachel Ntumba, who worked for 14 years in a team in Goma, chief town of eastern North Kivu province, responsible for the disarmament, demobilisation and social reinsertion of militia forces.

"They didn't take seniority or people's qualifications into account," added Ntumba, who holds a diploma in international law.

An eldest child, she must care for her parents and seven brothers and sisters.

When her job was cut, she said she managed to obtain "a small contract — not UN status — with the mission for three months."

But that contract ends in few days.

MONUSCO took over from an earlier UN peacekeeping mission, MONUC, in 2010.

It has already shut its offices in Kisangani, the biggest city in the northeast, and in the southwestern town of Matadi, since the end of June.

The closure was "carried out in a cavalier fashion... we hadn't even finished filling out the forms," said Denzu Nsimba, who handled logistics in Matadi.

"They cut off the internet and electricity and made off with the chairs without even waiting for us to pack up our things.

"In this country, where just to have a job is a blessing from heaven, I'm stuck at home, unemployed and no idea what to do."

Nsimba resented expatriate former colleagues who were redeployed elsewhere in the UN network. "The United Nations preaches respect for human rights, but what it practices on the ground is quite contrary to that."

Layoffs have also struck the newsroom at Radio Okapi, founded in 2002 during the Second Congo War by the UN in partnership with the Fondation Hirondelle of Switzerland.

"Expenditure that was linked to severance pay was paid into my account last month," said Alipanagama, a father of five who has taken in 12 additional people.

"I'm already investing part of the money to create a production unit in the farming and herding sector. The rest will be invested in property," added the journalist, who now supervises the communications service of the provincial government of Bas-Uele in the north.