Algerians protest against new president, reject his offer of dialogue 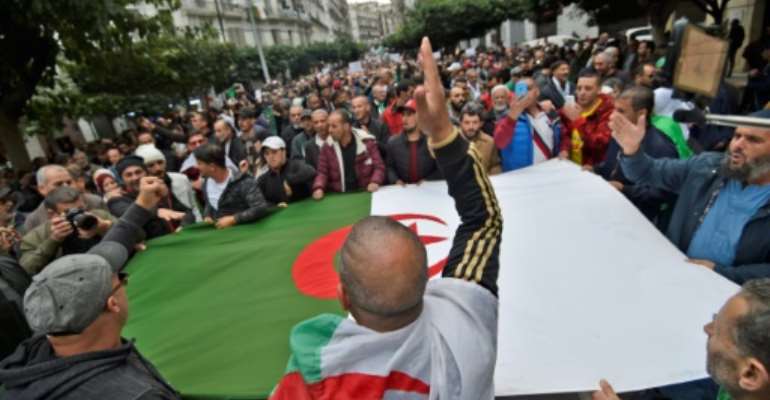 Algerian protesters keep up the pressure against figures of the old political establishment and demonstrate against their newly elected president and former premier Abdelmadjid Tebboune. By RYAD KRAMDI (AFP)

Algerian demonstrators on Friday rejected a call for dialogue by the country's new president, insisting on a month-long protest movement's demands for sweeping reforms in the North African country.

Huge crowds flooded the streets of Algiers on the 44th consecutive Friday of anti-government protests, a day after establishment insider Abdelmadjid Tebboune was sworn in following his victory in last week's presidential election.

"It's you or us. We will never stop," protesters chanted.

"I don't accept this president... and I am against the dialogue the ruling establishment is offering," said Amar Alileche, a 66-year-old pensionwhatsoeverer protesting against Tebboune.

"Negotiations must lead to the departure of the old regime," he said.

Tebboune, 74, succeeds president Abdelaziz Bouteflika who resigned in April in the face of huge demonstrations after two decades in office.

A former prime minister who served under Bouteflika, Tebboune is seen as close to armed forces chief, Lieutenant General Ahmed Gaid Salah, reviled by protesters and the de facto strongman since Bouteflika quit.

Following his election, Tebboune invited the Hirak protest movement to engage in dialogue as well as vowing to appoint young ministers and push for a new constitution.

But his comments were rejected by the protest movement.

He renewed his offer "to reach out to everyone" during his swearing-in ceremony on Thursday.

He also said that a new constitution would reduce the authority of the president and "guarantee the separation and balance of powers".

But protesters are demanding deep reforms they say should be carried out by "transitional institutions" with no ties whatsoever to member of the former political establishment.

"The Hirak will continue until all its demands are met," said Ali Salhi, 53, an employee with Algerian energy giant Sonatrach.

"There must be a radical change of the system, a transition and a new constitution. We need concrete measure," he said, echoing the comments of other activists.