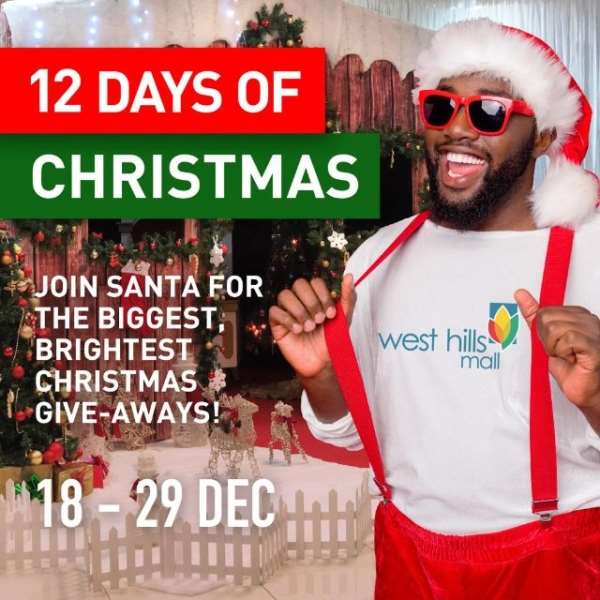 Santa Claus aka Father Christmas makes his first stopover in 2019 at West Hills Mall, management of Accra’s biggest family shopping Centre announced Friday, as it unveiled a loaded 12-day package of entertainment, recreation and sale for shoppers and patrons for this year’s Christmas and New Year season.

“Santa and his entourage will touch down here this evening but would only receive guests from tomorrow morning onwards and present goodies and gifts to children at our Santa Grotto,” Marketing Manager Ms. Wendy Aryee told bemused shoppers today.

Ms. Aryee also announced that beginning Wednesday 18th until December 29, shoppers could win bulgy Christmas gift hampers just by taking pictures with Santa at his Grotto or by posing for shots at the mall’s imposing Christmas tree. After taking the pictures, fans will be asked to tag West Hills Mall on Facebook, along with their wishes for the Christmas season. Twelve lucky shoppers and fans are lined up for a reward of special gift hampers presentation of which would be broadcast live on radio Pluzz FM.

“As from tonight...following the arrival of good old Santa, West Hills Mall would switch into the carnival mode and become Accra’s busiest most enchanting destination this Christmas season...offering customers and patrons the best in shopping, recreation and entertainment,” the Marketing Manager said.

On Boxing Day, according to Mall Management, one of Ghana’s most respected orchestral groups, the Ghana Police Band, would be on duty to treat the mall’s guests and revellers to a new repertoire of gospel music while on Saturday, December 28, the most sought-after Ghanaian gospel singer today, Joe Mettle, will lead the entire shopping centre in worship.

West Hills Mall will embrace the new year with yet another vibrant concert on January 1, 2020, when the Kri8 Concert rolls out a special bill loaded with surprising acts and new artists, according to management.

“In the midst of all the fanfare and entertainment, the first batch of our new tenants and stores have already joined the seasonal fray and have announced special deals and discount rates for shoppers and customers during the festive period”, disclosed, Ms Aryee.

The unisex clothing outlet, UK Brands, the Home décor specialist, Banana Home, Jocent fashion store, the Divine Organic Hub, the mall’s new health and beauty store, have already become the toast of regular shoppers and revellers as over the past few weeks, they easily blended into West Hills Mall’s five-year-old tradition of opening up to exceptional deals and bargains for shoppers on such special occasions.

The ‘Addos’, an extraordinary Ghanaian eatery and the latest arrival at the Mall’s Food Court, has brought a totally new dimension to cuisine and the quick food offering at the mall, with sumptuous pounded fufu standing out by far, as the star of the menu.