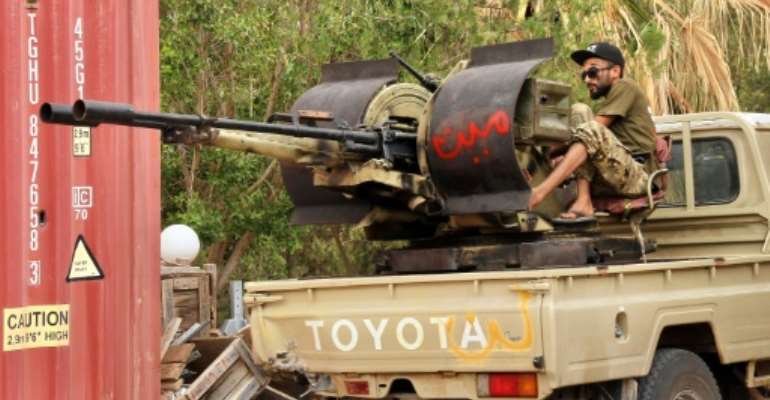 Fighters loyal to the UN-recognised Libyan Government of National Accord have battled forces loyal to strongman Khalifa Haftar south of the capital Tripoli. By Mahmud TURKIA (AFP/File)

Libya's UN-recognised unity government on Friday urged five "friendly countries" to implement military deals as it seeks to repel the forces of an eastern-based strongman fighting to seize the capital.

The call came a day after the Government of National Accord (GNA) approved the activation of such a deal with Ankara, paving the way for a bigger Turkish role eight months into Haftar's offensive.

Mired in chaos since the NATO-backed uprising that toppled and killed dictator Moamer Kadhafi eight years ago, the North African country has become split between bitterly opposed administrations in the east and west -- each backed by outside powers.

Tripoli-based GNA head Fayez al-Sarraj sent letters to the leaders of the United States, Britain, Italy, Algeria and Turkey, urging them to "activate security cooperation deals", his office said in a statement.

The aim is to help the GNA "face aggression against the Libyan capital... by any armed group operating outside the legitimacy of the state, to preserve social peace and achieve stability in Libya," he said.

The United Arab Emirates and Egypt have assisted Haftar while both Turkey and Qatar openly support the GNA.

Haftar's April push to seize Tripoli from "terrorists" backing the GNA made early gains but has stalled on the edges of the capital in a bloody stalemate.

According to the latest UN figures on Friday, the fighting has left at least 284 civilians dead and 363 wounded since the April 4 start of the armed conflict that has forced more than 140,000 Libyans to flee their homes. 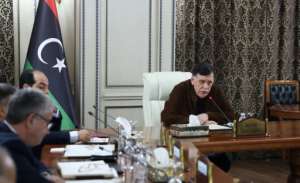 Libya's Prime Minister Fayez al-Sarraj of the UN-recognised Government of National Accord approved a deal with Turkey, paving the way for a bigger military role for Ankara in the conflict-hit country. By - (AFP)

Following the GNA's announcement over Turkey, the United Nations' mission in Libya, UNSMIL, renewed its call for a political solution to the conflict.

"UNSMIL regrets the recent developments: military escalation, growing foreign interference in Libya & exchange of treason accusations by Libyan parties, which put the unity of Libya at risk," it tweeted overnight.

Sarraj also called for help to battle the Islamic State group and Al-Qaeda, saying Haftar's offensive had given the jihadist groups "the appropriate opportunity and environment" for a resurgence in Libya.

IS was pushed out of its stronghold Sirte by forces loyal to the GNA in December 2016.

But despite losing its main territory, east of Tripoli, the group has repeatedly shown itself capable of launching deadly attacks.

Sarraj also called for greater cooperation in the fight against organised crime and to prevent irregular migration.