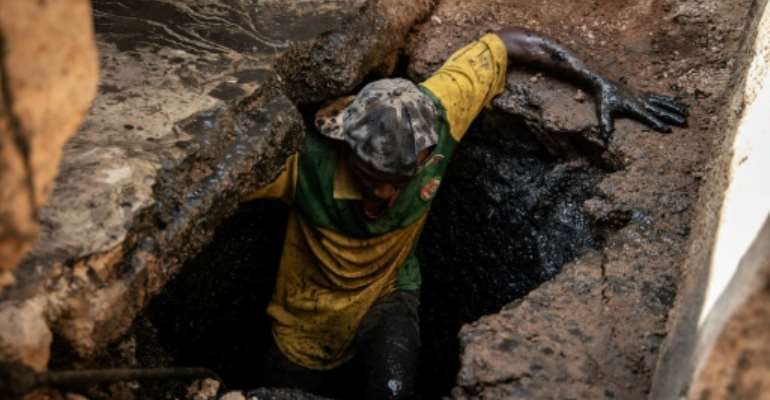 Return to light: Wendgoundin Sawadogo climbs back up after emptying a latrine in Ouagadougou. By OLYMPIA DE MAISMONT (AFP)

Wearing no protective clothing, Wendgoundin Sawadogo slides into the latrine and with a shovel heaves the faecal sludge into a bucket, which is then hauled to daylight, three metres (10 feet) up.

He is one of hundreds of workers in Burkina Faso who earn a meagre living by clearing cesspits, sometimes to the risk of their health.

"I've been doing this job for 15 years without protection, although we often find broken glass, bottles, syringes," said Sawadogo, his jeans blackened by the muck.

"Gloves and boots often stop us from working so we end up taking them off," said Issa Zongo.

Through their exposure to the sludge, workers risk coming down with cholera, typhoid and hepatitis, and cuts can lead to tetanus or septicaemia.

In the capital Ouagadougou, more than half of the three million inhabitants rely on sanitation workers to empty their latrines, according to city hall.

"Cesspit cleaners are marginalised, forgotten, left behind," said Alidou Bande, head of an association which campaigns for their rights.

Latrine workers haul away barrels filled with human waste -- Ouagadougou's sewage farms are located far away, which means the contents often get dumped on land on the city's outskirts. By OLYMPIA DE MAISMONT (AFP)

"We live from day to day," said Zongo, a 38-year-old father of two who has been a tank cleaner for 13 years.

He despairs of the stigma attached to his job.

"I have an 11-year-old daughter whose classmates make fun of her because I am a cesspit cleaner."

Sawadogo, 45, said he would continue to work in this despised business for as long as he could.

But, he said, "I don't want my children to be doing this work."