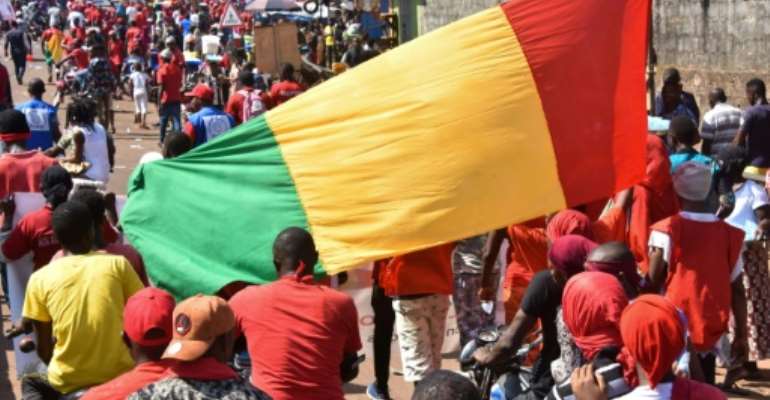 Guinea has been hit by protests against President Alpha Conde since October. By CELLOU BINANI (AFP/File)

President Alpha Conde on Thursday announced a new draft constitution for the West African country, which critics fear he will use to pursue a third term once his second ends in 2020.

Hundreds of thousands Guineans have demonstrated since mid-October over concerns the president plans to stay in office beyond the legally mandated two terms.

Conde, 81, has not yet confirmed whether he plans to run again.

"This is nothing short of a constitutional coup," Fode Oussou Fofana, vice president of the main opposition party, the Union of Democratic Forces of Guinea, told AFP.

He said changing the constitution to stay in power amounted to "high treason".

About 20 people have died since the protests began, according to an AFP tally, and one gendarme has also been killed. Scores of people have been arrested.

Although the draft text announced on Thursday stipulates a two-term limit, opposition leaders are convinced it is a Trojan horse that would allow Conde to stay in office longer.

A new constitution would reset the term counter to zero, they argue, allowing Conde to run a third time.

About 20 people have died since the protests began. By CELLOU BINANI (AFP/File)

One of the leaders of the group behind the protests, who declined to be named, told AFP that the move was "the height of provocation".

The opposition movement is preparing its response, the protest organiser said.

A former opposition figure himself, Conde has said that the former French colony's constitution needs reform because it "concentrates corporate interests".

In a televised statement on Thursday, the octogenarian president said the new draft constitution comes out of a debate surrounding "gaps and inconsistencies" in the text.

Conde launched consultations on the constitution in September, prompting giant protests in response.

For example, opposition groups said the latest rally on December 10 drew about one million people -- in a country of some 13 million people.

AFP was unable to independently confirm the figure.

The president on Thursday referred in passing to "socio-political actors" threatening public order, before promising to publicise the new text widely.

The country is due to hold a parliamentary election in February, and a presidential electin is also due to be held some time next year.

Many also expect the government will hold a referendum on the new constitution in 2020.

Saikou Yaya Barry, the executive secretary of opposition Union of Republican Forces, said "Guineans must stand up as one" against another Conde term.

Many were taken by surprise by Thursday's announcement, and opposition groups have begun to hold emergency talks, according to an official involved in them, who declined to be named.

A nationwide march -- planned before Thursday -- is due to take place on December 26.

Organisers say the protest will represent an ultimatum for the president before they proceed to "decisive action".

Conde, who was jailed and spent time in exile under Guinea's previous authoritarian regimes, became the country's first democratically elected president in 2010.

Despite initial hopes of new political dawn in the impoverished country, critics say his rule has become increasingly authoritarian.