Does Your Revolution Support Death Penalty? 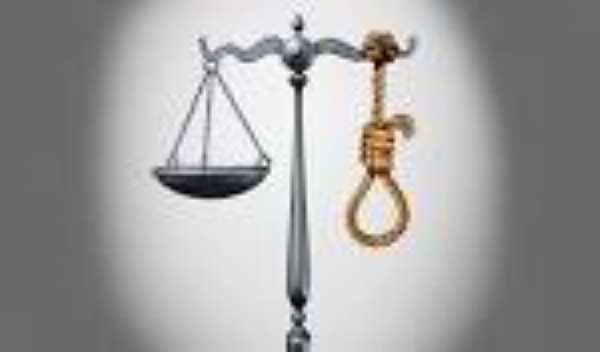 A Soldier, the Standardbearer of the Revolution bent on rebuilding the fallen walls of Africa was questioned on his views about how murderers should be treated in Ghana and Africa.

The questioner centred the question on a case that happened in Botswana, where a man was sentenced to death and executed on 2nd December, 2019 for murdering his employer.

The soldier answered as thus follows:
"If he's guilty of the charges on his head (murder of his employer), trialled in a court of competent jurisdiction, given time to defend himself, then, he deserves more harsher punishment than to be killed also".

Shedding more lights on his stance, the Standardbearer of the Revolution that invites all Africans everywhere, anywhere, behind a round table to brainstorm for the best strategy that will obliterate vestiges of imperialism, neocolonialism and exploitation, added that: " if I presided over the law with a fatwa/fiat/peremptory powers, I would have sentenced the murderer to a mandatory service to the deceased's (the murdered) immediate family. He would be providing for all their needs till they're no more. For who knows the murderer's next victim"?

Continuing, the Soldier added: "ideally, killing someone for killing others will take away all the forceful brains, the no-nonsense folks who yearns for justice by all means possible, out of our space. But, can we vouch for their (murderers) safe stay with the vulnerable, the unsuspecting, in the society? Must we continue the old nonsense of 'the dead is always guilty' as innocent lives could be taken away in a flash just because one thinks he's been offended, and would like to exact his own form of punishment on the alleged offender?. That only happens in a jungle where the strongest, the fittest, rule unchallenged because there is no existence of proper legal systems".

Closing his address to the questioner who is from the very country, Botswana, where the case under study happened, and had searched for and contacted the Soldier on a Social Media Platform (WhatsApp); the Soldier concluded that: "if facilities are not there to tame such people (murderers), as it's in the case of almost all African countries, being sentenced to death, and killed, is not misplaced. But, if with your support, my Revolution is given the best of welcomes and preside over Africa's laws, killing murderers and offenders of the law wouldn't be a priority. The Norway system, where a murderer is given a proper hearing, and sentenced to a condition that would change his poisonous mindset, rather than killing him also would be adapted and adopted. Who thought it that an "Islamaphobic", Anders Behring Breivik, who killed over 70 youths of the ruling party in July 2011 for his 'disdain for influx of Muslims in the European country' be sentenced to 21 years imprisonment, with the additional chance to learn Political Science whilst under detention? Such is a beautiful example worthy of emulation by all African nations that will come under my Revolution's umbrella". The Soldier concluded.

And so it'll be, if the Revolution that gets to your homes with the sacred message everyday mounts the Seat of Moses and preside over Justice.

Bigotry against Muslim students won't be tolerated – Muntaka...
42 minutes ago

Land acquisition: Don’t blame govt if you fail to do due dil...
2 hours ago