Man Who Drugs Uber Driver And Stole His Car Arrested 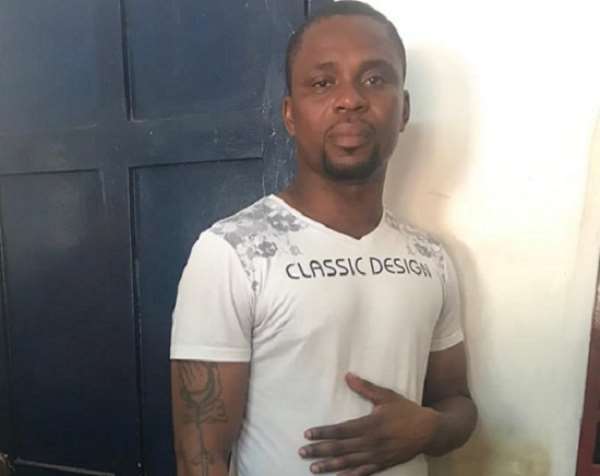 The Cantonments police have arrested a 30-year-old man for allegedly stealing an Uber vehicle from a driver after drugging him.

Suspect Edward Sena, according to the police, tampered with the drink of the driver which made him drowsy, paving way for him to steal his vehicle, two Samsung mobile phones and cash of GH¢300.

With the help of a car tracking device, suspect Sena was arrested from his hideout at Pokuase, near Amasaman.

Narrating the incident to DAILY GUIDE, the Accra Regional Police Public Relations Officer, Deputy Superintendent of Police (DSP) Effia Tenge, said on Saturday, December 14, 2019, at about 11:00 pm, the victim, in a state of drowsiness, visited the Cantonments Police Station Charge Office and reported that someone hired his services from Nkrumah Circle to Airport but when they got to Danquah Circle, the client invited him to have a drink with him while they waited for a flight to arrive at the airport.

The victim said while they were waiting at Purple Pub, his client served him a fruit juice.

He said after taking the drink, he lost consciousness but when he regained consciousness, the client had stolen his vehicle, together with his two Samsung phones and cash of GH¢300.

She revealed that since the vehicle had a tracking device, the police tracked the vehicle to Pokuase and with the assistance of the police information room and patrol teams, the vehicle was impounded and the suspect arrested.

DSP Tenge continued that Sena, at the time of his arrest, had changed the original registration number plate on the car and had fixed a fake one.

When his apartment was searched, she said, the police recovered one of the mobile phones of the victim in his possession.

The Accra Regional Police PRO said while in police custody, another victim came to the station to identify him as the same suspect who stole his car in a similarly fashion on May 10, 2019 at Nungua.

“We are calling on individuals who may have fallen victim to his nefarious activities to report at their respective police stations or the regional command for action,” she added.