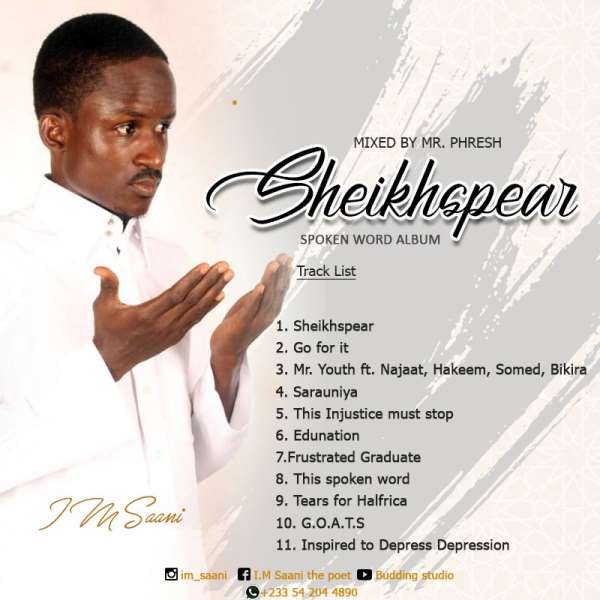 The title is a combination of the words, "sheikh" and "spear". In Arabic, "Sheikh" refers to a scholar — The word "spear" refers to a weapon with a long shaft used for throwing.

The title of the 11 track album makes one think it refers to the greatest literary artist, Shakespeare.

The creative concept of the album seeks to inject hope into its listeners, punch on societal ills, politics, education, love, and religion.

In an interview, I.M Saani said: "It is time to present my debut project to the world after four (4) years of poetry. Like a tertiary student would do to attain a degree, he would provide his project work first. This is my project work to the world, an audio/video spoken word album."

The launch of the album comes off the 26th December at Picorna Hotel Tamale together with the third edition of the inspirational poetry show.

He has written over 200 poems, performed on over 50 prolific platforms; written about 10 Stage play Scripts.

He's a personality of exquisite thoughts who delivers great performance on stage and known as the poet who creatively weaves words to inspire, educate, entertain and combat injustice.