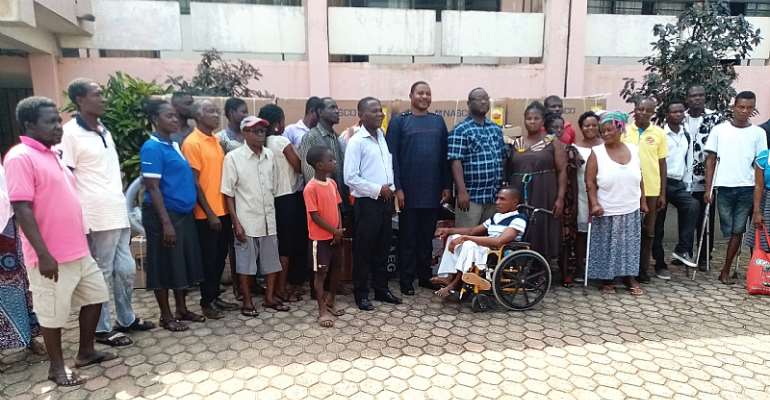 The Obuasi Municipal Assembly under the able leadership of Honorable Elijah Adansi-Bonah has made a third disbursement of the Disability Fund to some Persons living with disabilities in the district.

The Municipal Chief Executive Honorable Elijah Adansi-Bonah in an advice to beneficiaries before the disbursement on Thursday, December 19th, 2019, said to maintain the success story of the Disability Fund, it is important for beneficiaries to put them into good use.

He revealed that recently, Auditors were in the Municipality to ascertain whether the items distributed to beneficiaries were put into good use. "I am happy to tell you that, the Auditors confirmed that those who have benefited earlier on, have put their items into good use."

He assured those who could not benefit from this tranche that, the Assembly will take care of them very soon. He again advised them to channel their grievances to their Focal person or their leaders for redress.

The Municipal Director, Social Welfare Department, Obuasi Mr Emmanuel Akoto Sarpong also advised the beneficiaries not to sell their items but rather use them for their intended purpose to enhance their businesses and living standards.

Mr Ibrahim Seidu, an Assistant Director of the Assembly thanked the beneficiaries for their patience and assured those who are on standby that they will be attended to in due course.

The beneficiaries who spoke with the Information Services Department could not hide their joy. They expressed their profound gratitude to the Government and the Municipal Chief Executive for coming to their aid.

Hon. Elijah Adansi-Bonah since his appointment as Mce for Obuasi has resolved to ensure accountability in the disbursement of the Disability Fund. This practice of his has received commendations from the people of Obuasi.