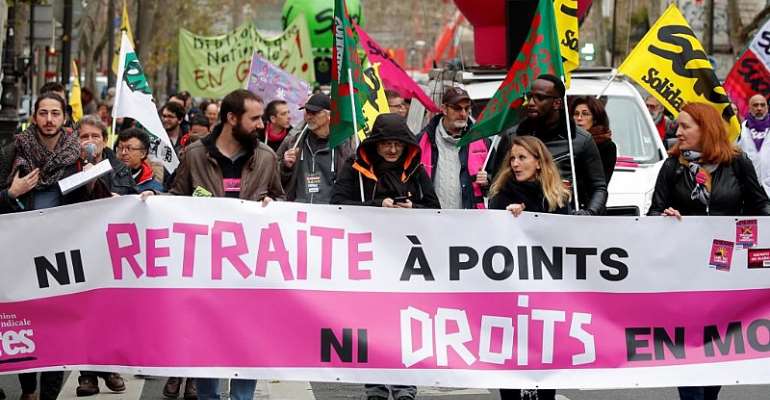 With one of the biggest weekends of the year, and biggest for Christmas departures trade unions and the French government remained at loggerheads of the proposed pension reform.

Friday is the 16th day of public transport strike and although there has been a slight improvement for travelers, the situation is still difficult. Only half of the high-speed long distance trains (TGV) and one in four regional Transiliens trains are currently running.

Metro lines in Paris are still badly disrupted with six lines closed although almost all trams are working.

As a result of these disruptions, there was nearly 375 km of traffic jams around the Paris region at 9am in the morning.

Some 400 trade unionists from the CGT also tried to disrupt the functioning of the Rungis market overnight, but the police prevented them from entering.

For the coming days, 59% of the TGV and Intercités scheduled for December 23 and 24 are canceled, and half of the travelers who have reserved will have to exchange their ticket. The SNCF announcements concerning trains running on the Chirstmas Day and the day after are still awaited.

A pause in the strike action over holiday break appears unlikely. If Unsa rail, 2nd union of the SNCF, called for "a break for the holidays", the CGT-Cheminots and SUD-Rail, 1st and 3rd union federations of the company, decided to continue the movement.

Across the RATP, Unsa (1st union), which considers the responses to its demands "incomplete", prefers to leave general meetings "sovereign, to position themselves".

Talks with the government on Thursday evening ended with unions announcing another big protest day on January 9.

Prime Minister Edouard Philippe said there had been "advances" in the talks, adding that there would be more talks early in the New Year.

A series of meetings Wednesday had also failed to bring the two sides closer, though President Emmanuel Macron had indicated he was "willing to improve" his plan for forging a single, points-based system out of 42 existing schemes.

'Pivot age'
Unions baulk in particular at a new "pivot age" of 64 for workers to earn a full pension -- two years beyond the official retirement age.

They are hoping for a repeat of 1995 when the government backed down on pension reform after three weeks of metro and rail stoppages just before Christmas.

An Ifop poll released Thursday found six out of 10 respondents oppose the "pivot age" and more than half have sympathy for the strike despite the daily transport misery brought to bear on millions.

Workers for the SNCF and RATP transport companies have downed tools in protest against the prospect of losing their preferential early retirement dispensation, causing severe disruptions to train, metro and bus services in Paris and other big cities that are set to continue for a 16th day Friday.

On Thursday, the SNCF said 59 percent of its high-speed TGV and inter-city trains will be cancelled

'Red line'
As attitudes appeared to harden, striking workers interrupted power supply to some 18,000 homes in southern France, including Perpignan and Narbonne, and 12,000 homes in the northern city of Beauvais, grid operator Enedis said.

And protesters again staged rallies across France on Thursday, with several hundred marching from the Gare de Lyon in Paris.

The government has vowed it will press ahead with its reform, saying a single pension system will be fairer and more transparent, especially for women and low earners.

Even the moderate CFDT union, France's largest, has called the 64-year pivot age a "red line," though it backs Macron's push for a single pension scheme for all workers.

Valerie Pecresse, president of the Ile-de-France region encompassing Paris, called on transport operator RATP to fully reimburse commuters for the mayhem since the strike started on December 5.

"And don't try telling me that some lines still have some trains, because the truth is that for everyone, this minimal service is basically nothing," she told RTL radio.

Several universities have cancelled or postponed year-end exams since students cannot get to testing centres, and both the Paris and Garnier operas -- whose workers also benefit from an early retirement scheme -- have dropped dozens of performances.

The protest is also taking a heavy toll on businesses during one of the busiest periods of the year, with industry associations reporting turnover declines of 30 to 60 percent from a year earlier.

Junior Economy Minister Agnes Pannier-Runacher on Friday urged people to patronise local businesses during the crucial holiday season, saying "it's time to give them a hand".

Pressure mounted on the government this week when it had to scramble to replace the official overseeing the pension negotiations. Jean-Paul Delevoye was forced to resign after it emerged he had failed to declare more than 120,000 euros of income from outside work.

He now faces an inquiry into the omissions on his asset statements and potentially unlawful remuneration while occupying a government post, the Paris prosecutor's office announced Thursday.

Bigotry against Muslim students won't be tolerated – Muntaka...
32 minutes ago