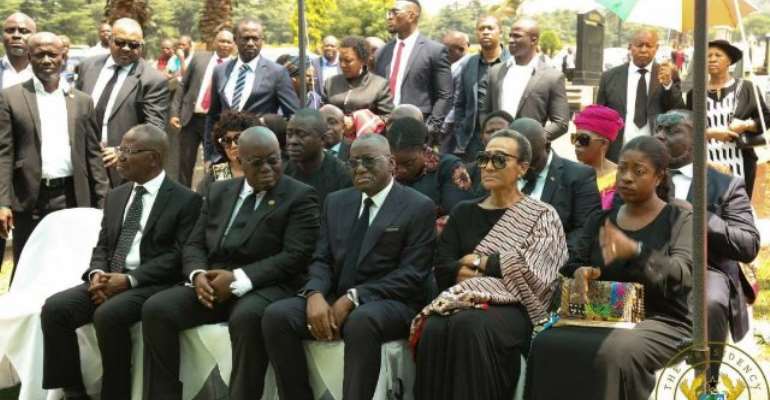 Government has defended its spending of GH¢26,300.20 as donations to funeral ceremonies captured in the Office of the Chief of Staff expenditure submitted to Parliament on Thursday.

“There are lots of funerals that the state intervenes...for instance the former Secretary-General of the UN, Kofi Annan, former Vice President, some astute public servants, some people who spent their whole adult life serving the state in public or civil service...I have sadly been around where very hardworking staff have either passed away and the Office deems it appropriate to make a donation to motivate workers...” he told Kojo Yankson on the Super Morning Show , Friday.

The Akufo-Addo government has come under severe criticisms after figures that the Office of the Chief of Staff submitted to Parliament on Thursday to account for its spending from January to September 2019, were said to be extravagant.

A breakdown of the expenditure reveals that the office spent GH¢1.9 million on refreshments, GH¢62 million on foreign travels and GH¢10,930 for school fees.

Cassiel Ato Forson, Minority Spokesperson on Finance, is leading a campaign to demand accountability from government , on grounds that the nine-month expenditure for the Office of the Chief of Staff, from which the Presidency operates, is extravagant.

The Minority in Parliament is of the view that the money could have been used to provide basic amenities for many poor Ghanaians.

“This spending is something that we don’t have to encourage. I strongly believe that the time has come for Ghanaians to demand accountability from the Office of the President in terms of the expenditure that goes on there,” Ato Forson said, Thursday.

But Mr Jinapor has dispelled the Minority in Parliament’s concern that the Presidency was reckless in its expenditure this year.

He said the Finance Committee of Parliament, which has a representative from the Minority, interrogated the budget that the Office of the Chief of Staff submitted to it before approval.

“We need to have a national conversation about this...don’t forget we have to situate it within the cultural and traditional setting. In other countries it's different. There have been some expenditure which has been part and parcel of our public exchequer for many years which if we put out here some people may find it scandalous,” he said.

He said if such expenses are considered in the country’s social context, it would be difficult to do away with henceforth.

“Funeral expenses in particular, in our country, there are certain funerals like those prominent chiefs where the President is invited and he attends and cannot go without giving something for funeral contribution (‘nsawa’, as the Akans call it) or gives something small like GH¢500, you can imagine the uproar,” he said.