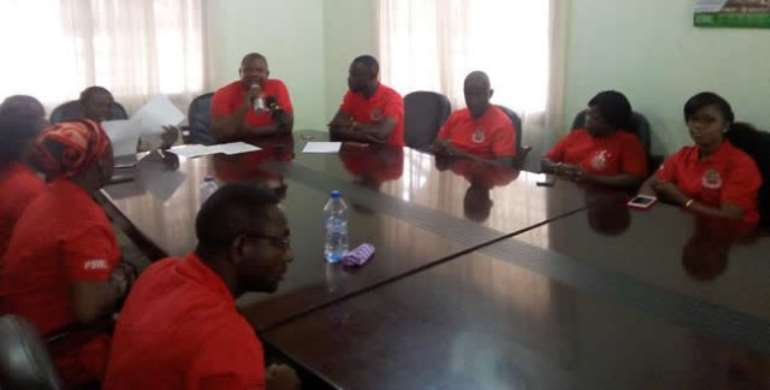 The Divisional Union of the Public Service Workers' Union (PSWU) of the National Board for Small Scale Industries (NBSSI) is calling on government and stakeholders to abolish plans to privatize the Business Resource Centres.

The Union expressed this concern at a press engagement held in Accra.

Mr Boakye Agyeman Godfred, Divisional Chairman, NBSSI PSWU in a statement read on his behalf said the union had taken notice of complete neglect of its members with regards to the management and the operationalisations of the BRCs despite the roles played by its members in the programme phases.

"We would like to remind the Project Management and Coordinating Unit of the Rural Enterprise Programme (REP) that, without the sacrifices and hard work of our members the success chalked in REP 1, REP 2 the REP would not have been possible," he said.

He said the union was displeased by their neglect and more so the planned privatization of the BRCs which were built from loans contracted by the government.

"It’s not right to hand over a national asset to any private individual or group at no cost at the expense of the citizenry," he said.

He said the privatization would deny Micro and Small Enterprises (SMEs) access to the needed critical business development services to propel the nation's economic development.

He cautioned that if their plea was not heard the union would redraw any form of working relationship with REP.

"Our members would resist any attempt to handover public good to any private individual or group and pledge to protect the interest of the state, SMEs and staff members," he said.

He said they looked forward to government to take action within two weeks; “our members would continue to render services to other partners and projects of NBSSI while waiting for positive feedback from partners and stakeholders.

The Union further presented a letter to the Minister of Finance through his ministry regarding the issue.