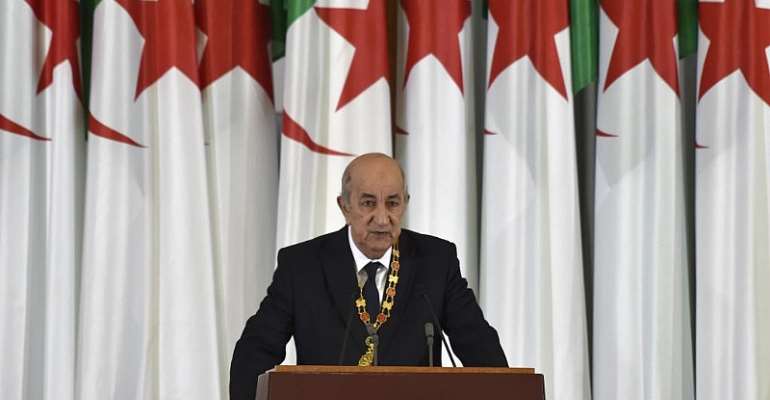 Algeria's former prime minister Abdelmadjid Tebboune has been sworn in as the new president amid ongoing protests against his election, which critics say is illegitimate.

Tebboune takes over from Abdelaziz Boutelfika, who was ousted from office in April after protesters took to the streets en masse to denounce his candidacy for a fifth term.

Presidential elections were due to be held in July but protesters, notably from the main movement 'Hirak', boycotted the polls when only two candidates were validated.

The vote was rescheduled for December, but with all five candidates linked to Bouteflika, it was also widely boycotted. The opposition saying the new poll would not rid the country of its old political elite, in power since Algeria's independence in 1962.

In the lead up to the election, protesters clashed with police, who carried out mass arrests – a first since the peaceful movement erupted back in February.

The military, a force stronger than the government, backed the vote in the hope that a newly elected head of state might ease the standoff. That hope, for the moment, appears to have been in vain.

Tebboune's vows
Following his election, Tebboune vowed to extend a hand to the Hirak for dialogue, appoint young ministers and push for a new constitution that would limit the presidential terms to two.

He also pledged to fight corruption and diversify the economy.

Although he took 58 percent of the vote, avoiding the need for a run-off, the boycott effectively reduces his haul to 20 percent of registered voters.

Demonstrators, out on the street once again, have denounced Tebboune as "illegitimate".

“Tebboune and all other candidates are part of the regime," Yassine Abdellah Rafik, a legal counsel and protester, told RFI from Algeria. "That whole process is in total contradiction of demonstrators' demands.”

But Rafik conceded that demonstrators could warm to Tebboune if he takes concrete action, suggesting the liberation of "prisoners of conscience" and a complete halt to the crackdown on protesters.

Military still in power
While Algeria has a new head of state, many still view the government as controlled by the military.

This limits President Tebboune's ability to bring about real reform, for two main reasons, according to Zine Labidine Ghebouli, a political analyst with the Washington Institute for Near East Policy.

“He was propped up by the military and he also lacks the necessary popular support," said Labidine Ghebouli. "We may see Tebboune engaging in some limited measures of appeasement, but any serious action to tackle Algeria's crisis of legitimacy will be harshly faced by the military junta.”

Popularity
In 2017, during his short stint as prime minister under Bouteflika, Tebboune was relatively popular.

“He went after the oligarchs and corruption,” explains Habib Brahmia, a member of the Political Council and Executive Secretary of Communication for the Jil Jadid party.

That alone put him at odds with Said Bouteflika. He lasted just three months in the job, but he won much support across different layers of society.

While Tebboune remains a relic of the old regime for many, his days as prime minister has some believing that he could be a break from Bouteflikism, Brahmia says.