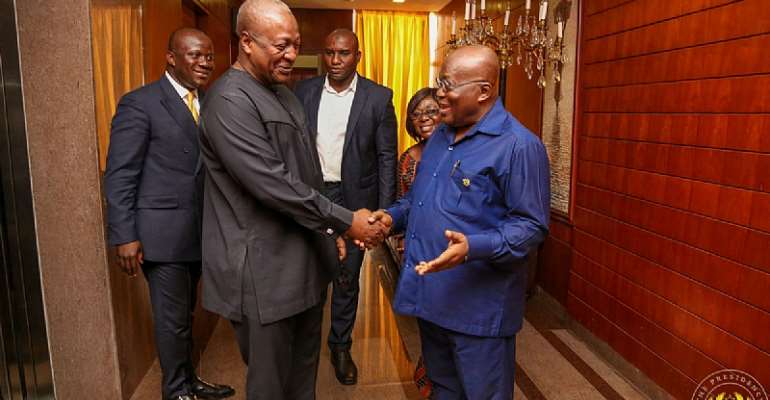 Effective leaders transcend the title of President or boss. It may seem like some people are naturally gifted with leadership skills, but the truth is most leadership traits can be learned and sharpened with time and practice. Mature, responsible leaders claim their share of anything that went wrong and are quick to accept blame, and even faster to assign credit to others when things go well. That is the kind of leadership John Mahama has exhibited so far. When the situation got messed up, and his supporters and executives didn't know what to do with it, he did not sweep it under the rug or waited for someone else to take the lead in clearing the mess. He took the initiative. He wasn't vague, he personally did solid post mortems on the problems to figure out what happened, what he and the party could have done to avoid it and then figured out how to not let it happen again. Failure, or defeat in politics are unpleasant words, with bleak connotations. Yet they are words that apply to every competition and to every one of us at different stages of our lives. No one is exempt. Our top gurus, athletes, football clubs, religious leaders etc all fail. It is a label that we fight desperately to avoid. And it is this fight to avoid failure or its repetition that drives us forward towards our life accomplishment. So, why can't we take responsibility of our group's failure as leaders when it does occur?. In politics, we cannot reach a full level of maturity until we accept ownership of our own mistakes, or mistakes of our parties.

John Mahama has become more popular and winning hearts of many Ghanaians including those who chastised him few years ago because of how he handled his party's defeat and the genuine respect he accorded Ghanaians including those who voted him out - by accepting the result in good faith, taking responsibility of the wrongs, apologising, promising to make amends where he and his government went wrong, and going back to Ghanaians to take their views to help him and his party draft a truly "people-centered" manifesto. Many associations including the Ghana Medical Association, the Ghana Bar Association etc have commanded him and his party for embarking on that unprecedented initiative.

Our discussions these days are dominated by the 2020 elections and what the numbers will look like. While we wait for the election day, here is an attempt to understand John Mahama and Akufo-Addo as leaders. This would give us a fair indication of why John Mahama who was defeated in a Presidential election just three years ago, has become so popular and dwarfing Akufo-Addo who enjoyed massive support few years ago.

There are many ways to define leadership as I stated in my introduction. In this article I have chosen seven (7) key elements of any leader. The first is what motivates a leader to behave and act the way he does. The second is his ability to stand by his decisions and actions. The third is his ability to paint a future and inspire individuals to achieve and create that future. The Fourth is about being comfortable with himself and is about self esteem and self confidence. The fifth is his ability to organise people to achieve his vision. The sixth is His ability to understand the pulse of the nation, the seventh is his ability to take criticisms and the final element is his ability to carry all sections of society and the opposition to build the nation.

These are the critical elements we must look at when assessing these two leaders. Issues about tribal connection and permutations, family and friendship ties, academic laurels and age, height and colour are all trivial issues.

MOTIVATION
Mahama is self driven by a great desire to take Ghana to glorious future. It is that character that allowed him to overcome the obstacles and challenges he met. It also allowed him to act with confidence and certain forcefulness and aggression his four years. How he fixed the decades old power crisis is commendable. How he built schools roads, hospitals, renovated ports etc within four years was remarkable. Prices of our export commodities were low, oil revenue was low during his time, the power crisis tormented his administration, he spent good eight months in court over the election petition case etc but was able to transform the country and changed lives.

Akufo-Addo on the other does not demonstrate motivation. He was pushed into a leadership role purely on the basis of his pedigree when it comes to politics. Akufo-Addo has always had complete support, hand holding and security of his family and party. He never has had to work hard to achieve anything.

VISION
John Mahama dreams big and has a vision. His vision spans not just dreams but aspects relating to improving the quality of life of the poor Ghanaian. Under his watch, Ghana was rated the number in west Africa in terms of human development index, we were second to south Africa in terms of provision of potable water. The schools he built, toilets, roads, hospitals, polyclinics, midwifery schools etc all reflect his vision. His visions and positivity about the future inspired and continue to inspire millions of people on the continent of Africa.

Akufo-Addo has still not articulated his vision clearly enough. It's not just having a vision or writing it in your manifesto but being passionate about it and communicating it to people in simple and coherent manner. When Mahama talks about his vision, whether one agrees with it or not, one can see his passion and genuineness in the picture he paints of Ghana's future. Also, because Akufo-addo has no clear vision for Ghana, he gets emotional when you ask him to explain the very policies he throws out.

CONNECTEDNESS WITH PEOPLE
When Mahama was the President, he demonstrated that it was not only supporters of his party who made him the President of Ghana but the citizens and people of Ghana. His years of work across the country as an MP, a minister and a Vice President, allowed him to truly understand the Ghanaian citizen- both in rural and urban Ghana. It is that understanding that reflected in the policies he implemented. In opposition, he continues to capture feedback from the citizens through several ways to ensure he is firmly linked to people's needs and requirements.

Akufo-addo seems to rely on thinkers in Accra. He has so far shown that he lacks vision and his complete disconnect with the common masses leads him to focus on the opposition rather than building the life of citizen's and nation Ghana.

COMFORTABLE WITH ONESELF
Apart from Nkrumah, Acheampong, Limann, Rawlings, Prof Mills, our leaders looked at themselves through western lens. Mahama set his own standards on how the world should view him and his Ghana. He strongly articulated his Pan African philosophy and boldly spoke against ills in the world including the dangerous Israel- Palestine issue. Shimon Perez described him a true son of Nkrumah for that great speech he delivered at the United States (Where he boldly condemned happenings in Palestine). He is very comfortable with his ideological persuasion and the philosophy of his party and has never departed from the party's ideals.

Akufo-addo continue to follow the Busianian tradition ( Western tradition, grammar etc). He still believes in those colonial ideals and traditions.

EXECUTION OF POLICIES
John Mahama believes that having a vision is only a starting point, executing it is the true test. In this Mahama did a fairly decent job of ensuring that every corner of Ghana got its share of his projects. He executed almost all the projects and policies he promised Ghanaians and went on to do others he did not promise.

Here, I would say Akufo-addo is on a bad footing. He inherited a party that had lived on unfulfilled promises. He has made this worse by failing to fulfill the sweet promises he made on his campaign platforms. His lack of understanding of details suggest a serious drawback as a leader.

INCLUSIVENESS
Mahama was able to build consensus amongst His party. He got all including his internal opponents on board. The same cannot be said of Akufo-addo.

RELATIONSHIP WITH POLITICAL OPPONENTS
Mahama created a very safe environment for his political opponents to operate. His political opponents and the media criticized him and his government without looking back. Ghana was rated high in terms of governance because of his demeanor and style of Governance. He appointed some known Npp bigwigs including Mr Kwame Pianim into his administration to support his agenda with their expertise. He invited the main opposition party to his economic forum at Senchi.

Same cannot be said of Akufo-addo. Political opponents are seen as enemies and are not being allowed to operate freely as it was under Mahama. His administration has closed down radio stations perceived to be pro NDC, people are being sacked from state institutions because of they support the NDC and his administration has collapsed businesses owned by NDC sympathizers.

In sum, I would say that John Mahama is a self driven individual with high initiative, communication, vision and execution. He is very tolerant of others views including views and thoughts of his ardent critics. He is an inspiring leader, very observant, analytical thinker who solves problems quickly and efficiently. These are the traits Ghanaians want their leaders to exhibit. Akufo-addo on the other hand should hand over the day to day reins of his party to one of the young guys to save his party from further disgrace and shame.