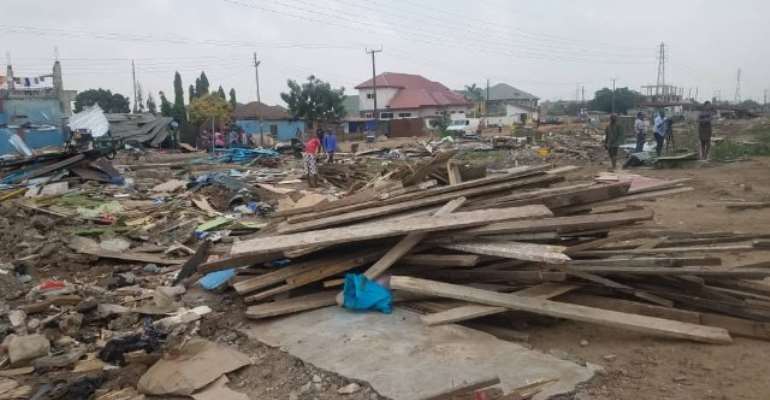 Residents have been left stranded after the demolition exercise

Hundreds of residents in Tema Trasacco have been rendered homeless following a demolition exercise early Thursday by a combined force of military and police personnel.

The displaced residents who were standing by helplessly after most of their properties were destroyed said, they were not forewarned about the exercise.

They urged government to intervene by putting up shelters for the less-privileged or risk having the streets flooded with homeless people.

A victim who spoke to Joy News described the incident as unfortunate.

“What happened today was not right. They just came over without telling us. We were not warned, they just came to destroy our homes and left. Now, we are here stranded and confused. We have been planning on how to move from here because it is dangerous. The motorway scares us, we get scared at night so we were actually planning to relocate and this happened today.

In fact, we were sleeping when we heard people making noise, so we came out only to be told that the people are demolition houses and heading towards us. We quickly started to bring out a few things.”

She told correspondent Nana Yaw Sarfo, the rent fee of GH â‚µ 30 requested by landlords have kept many people living in the make-shift shelters as it was overly expensive.

“I have tried looking for a place to rent on several occasions. The last time I found a place, the landlord said he will take GH â‚µ 30 a month. If you multiply that by 12 months, that is a lot of money so I told him I couldn’t afford it. It is not as if we are not trying and we do understand what government is saying but I would like to ask if it is all Ghanaians that can afford to rent a place? The government must help us. We have children and we don’t want them to grow wayward. As at now, we don’t have any place to go, we will sleep outside and just plead with God to help us.”