Training on Freedom of Expression Organized by FESOJ Kicks off in Baidoa. 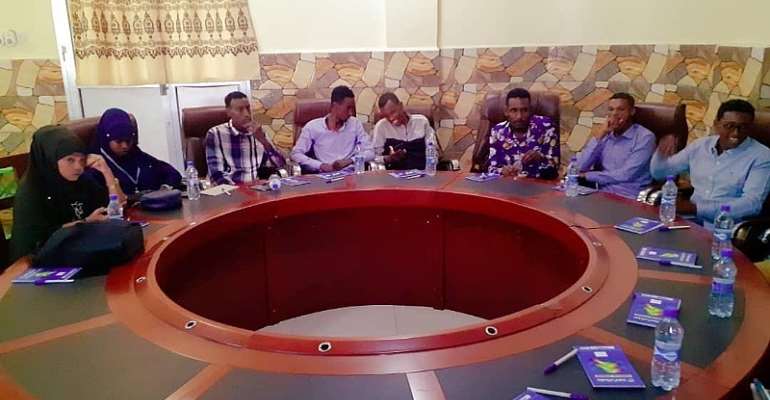 Mogadishu, In collaboration with the Free Press unlimited, Federation of Somali Journalists (FESOJ) has today kicked off a two-day training on freedom of expression for 20 journalists from different media outlets in Baidoa.

The overall objective of the training is to improve the capacity of local reporters and strengthen the environment for freedom of expression and journalistic professionalism.

Farah Omar Nur, head of Training and Development of FESOJ and long serving journalist said “We are going to equip journalists working in diverse media in Baidoa with skills and knowledge to sustain professional standards and to produce professional reports while paying premium to their Safety and Protection”

Minister of Information for the State of Southwest State of Somalia Mr Ugas Hassan Abdi Mohamed said at the opening ceremony that they welcome FESOJ's training to journalists, especially on a very important topic of freedom of speech.

“From our side, we fully guarantee freedom of speech and to ensure that journalists carry out their duties independently, but on the other side journalists are also required to responsible and provisional media that does not lead to social conflict as our communities are vulnerable and recently came out long years of tribal and religious conflict”

Journalists participating in the training said they hope that the training would contribute more to the rights as journalists the media and also remind authorities of the importance of freedom of the press.

“FESOJ strongly supports freedom of expression, and realizes that such training improves access to information and promotes the status of journalists in Somalia,” said Mohamed Ibrahim Moalimuu the Secretary General of Federation of Somali Journalists (FESOJ)

Radio, television and other media have grown rapidly in the last decade throughout the country. Currently there are 79 radio stations across the country, 29 newspapers and 25 Somali language television stations, including 8 based in the United Kingdom. The most widely accessible and primary medium of information still remains the radio despite social media usage is growing fast.