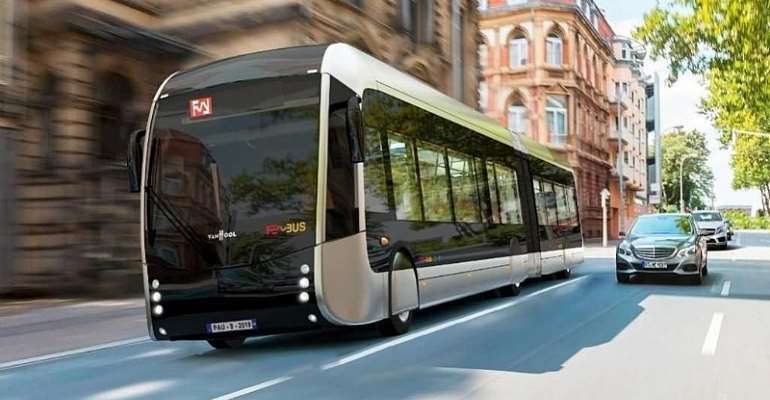 While crippling transport strikes keep parts of France in a state of gridlock, residents of the charming town of Pau, on the northern edge of the Pyrénées Mountains, are being treated to a free ride on the world's first hydrogen-powered transit buses.

Hailed as a technological revolution, the Bus Rapid Transit (BRT) system Fébus, named after the French Count of Foix, had been due to receive full presidential honours on Tuesday when six of its fleet of eight buses set off on their maiden voyages.

“Scheduling reasons”, however, meant Emmanuel Macron was unable to make it to the south of France to inaugurate the sophisticated 18-metre buses, designed by Belgian engineering company Van Hool.

French media reported it would indeed be difficult for Macron, in the midst of a social movement, to promote a new mode of collective transport when much of the country has been deprived of any means of transport at all.

The Fébus buses, which cost a cool 1.8 million euros each to make, are a mix between a bus and tram. They operate along a 6km express line, serving 14 stations between Pau's train station and hospital.

Eighty-five percent of the route is a protected lane, with the Fébus given right of way at intersections. This guarantees a journey time of about 17 minutes both in and out of peak hours for the 125 people that can fit on each bus.

The Fébus draws its energy from a hydrogen fuel cell. Vehicles are refuelled overnight at a custom-made hydrogen station, which uses a solar-powered electrolyser to produce up to 268kg of hydrogen a day.

“This is a completely decarbonised transportation system with no pollution; each hydrogen vehicle emits only water,” says Jean Marc Ducros, the director of alternative energies at Keolis – the Franco-Québécois company involved in operating the Fébus fleet.

Of course Pau is not a bustling, polluted city like Paris – it's a quaint country town complete with a castle. So is there a future for hydrogen-fuelled BRT systems in our more chaotic, congested cities?

“Definitely – there are several plans to deploy this new clean and zero emission vehicles in France and elsewhere in Europe,” Ducros affirms.

“There's an atmosphere protection plan in France called the Energy Transition Law, which is intended to solve environmental and public health issues – and many cities have a dedicated plan for supporting renewables.”

The European Commission has described hydrogen as an energy carrier with “great potential for clean, efficient power”. While there are many benefits when it comes to hydrogen fuel cell vehicles, cost and a lack of charging infrastructure could potentially hamper widespread adoption.

“Unfortunately, this new technology is expensive – but it's clear that a mass production of fuel cells and hydrogen tanks would see the cost of vehicles decrease rapidly,” says Ducros.

“By 2025, some bus manufacturers say the cost of hydrogen buses will be the same as electric battery vehicles.”