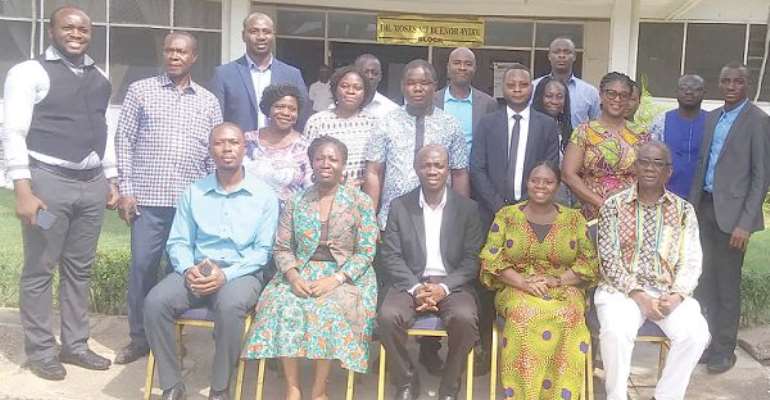 Some of the participants, including the researchers

A four-year research that seeks to find a lasting solution to recurrent conflicts between farmers and herdsmen in the country and other parts of West Africa has been launched at Akyawkrom, near Ejisu in the Ashanti Region.

Dubbed: “Access and authority nexus in farmer-herder conflicts”, the project, which is being funded by the Danish International Development Agency (DANIDA), is aimed at providing information to guide policy dialogue.

They were selected because they are more prone to the herder-farmer conflicts in the country.

The research has been assigned to three PhD students, two post-doctoral researchers and six MPhil students from the participating universities.

The team will have community meetings, seminars and conferences on how farmers and herders justify their claims to land.

They will also establish why claims to lands result in clashes, how the conflicts have impacted on livelihoods, how statutory and other institutions mediate such conflicts and how to provide policy advice on the conflicts to ensure their resolution.

Significance
In an address read by the Deputy Minister of Food and Agriculture in charge of Annual Crops, Dr Sagre Bambangi, on his behalf, the sector Minister, Dr Owusu Afriyie Akoto, said the research would enhance policy making in the country and the rest of the sub-region.

He commended the research institutions and DANIDA for the initiative and pledged the government’s support towards its conduct.

According to the minister, herder-farmer conflicts affected every aspect of the agricultural sector, adding that directly or indirectly, the nation’s economy suffered extensively.

He expressed the hope that recommendations of the research would help provide a lasting solution to the conflicts between farmers and herdsmen and the attendant loss of lives and destruction of properties.

Dr Akoto said the livestock sub-sector could play a significant role in the growth of the country’s economy.

She charged the research team to critically look at the source of the problem and the best ways of curbing it.

She stated that the relationship between Denmark and Ghana had, since 1961, been very cordial and that Denmark had supported Ghana to enhance development in various sectors, such as health, good governance, water and sanitation, decentralisation and private sector development.

Background
Farmer-herder conflicts have become a major challenge in countries in West Africa. While farmers work to secure their lands for farming, herders are said be encroaching on the lands to keep their animals and for grazing.

This has often led to mistrust and conflicts between the farmers and the herders, leading to the destruction of properties and loss of lives in communities.