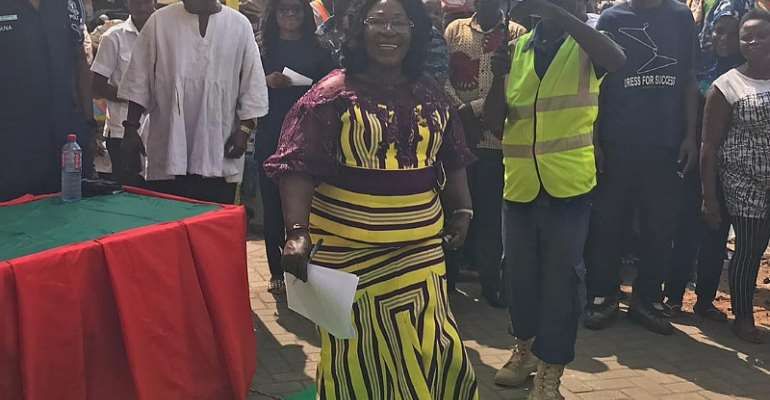 Chief of Staff, Akosua Frema Osei-Opare says she is unhappy about the low turnout recorded at various centres during the district assembly elections.

According to her, it is about time the public attaches importance to it.

Speaking at a sod-cutting of new facilities at the Taifa-Brukina market in Accra, she said “I hear so but I have not head of the official percentage turnout but at my own polling station, I realised there was no queue. The queue you see during Presidential and Parliamentary elections was not the same as this”

She added since the district assembly elections have been in existence for years, it will be of great importance if the country revisits it.

“It is the same people and same polling stations we form queues and vote, how come in some elections, people are there and in others, people are not there?”

She called on the Legislation to revisit the Constitution and find alternatives which will make the district assembly elections competitive.

The Chief of Staff was, however, doubtful the aborted Referendum contributed to the low numbers recorded.

She challenged the Media, Academia among others to examine the reasons for the low interest in participating in district assembly elections.

Hon. Osei-Opare called for a dialogue between Authorities and the public on the need of voting adding that lapses in the system must be recognised and worked on.

“If people have placed their confidence and trust in you, it is upon you not to disappoint them. You know your role. The local situations are under your care”

She reminded the newly elected that their victory is for the community hence the need to serve and be available for the people.

In other developments, the Chief also used the occasion to cut sod for the construction of a 1NO. 60-Unit Market Stalls for traders at the Dome market in the Dome Kwabenya Constituency.

She said “Your MP, Adwoa Safo has been on my neck since day 1and I have no choice than to grant her request. I buy my stuffs here and it is important to make this market look more beautiful and attractive”

She charged the Market women to make good use of the facility after its completion to allow free-flow movement of hawkers and buyers in the market.

Member of Parliament for Dome Kwabenya, Adwoa Safo said “As a mother of this constituency, I appreciate the pain that you have endured for years and the inconveniences that the state of this market has created. But in all, I thank the Lord Almighty God that today marks the beginning of yet another positive improvement in our economic lives”

She added that upgrading this market would help attract more buyers from our neighbouring constituencies into the market and subsequently increase the daily sales of the market women.

She noted that this would help improve the economic status of my fellow women.

She revealed that Prolux Construction Limited is the construction assignment to construct the facility at an estimated cost of Nine Million, Four Hundred Thousand Ghana Cedis (GHC 9,400,000.00).

“The project is to be completed within Eight (8) Calender months and is funded by the Ministry of Special Development Initiatives” she added.

Municipal Chief Executive of Ga East Municipal Assembly, Janet Tulasi-Mensah urged the contractors to work hard and diligently for the speedy completion of this project without compromising on quality.

“I plead with traders, customers and constituents to be more patient since the construction will cause lots of inconveniences”

The Chief of Staff later in the day commissioned a new facility at the Taifa-Brukina market which will be used for bulk business of good and services.