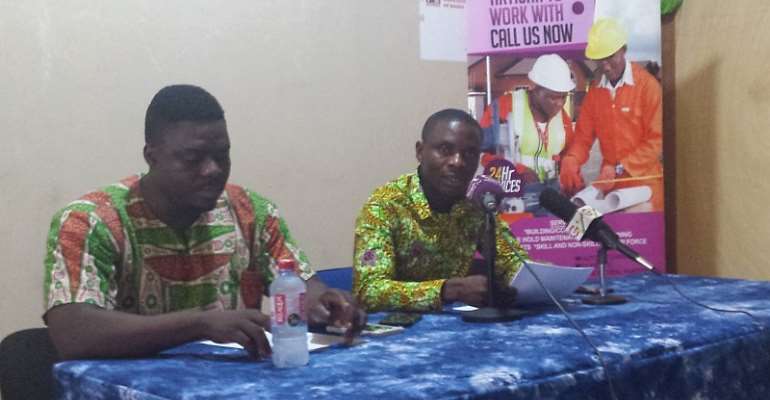 President of the Artisans Association of Ghana (AAG), Mr. Gideon Bidoh, has bemoaned on how governments have failed in supporting their own when awarding contracts in the local assemblies.

Addressing the media, he charged the current government to make it a priority in putting local contractors first in terms of awarding contracts in the district assemblies.

“It is quite disappointing and so discrediting however that for a developing country like Ghana, where artisans play a crucial role in terms of nation-building, successive governments have paid very little attention to supporting their own when it comes to the award of key government contracts in the local assemblies,” he said

“Mostly when quizzed, the assertion is that Small Medium Enterprises (SMEs) don’t have the capacity to execute those contracts, at other times, we are told that the source of funding for the various projects requires that the contract is awarded to foreign companies. How can we develop as a nation with such backward excuses that fight against our own people?” he asked

“This ill-treatment of our local SMEs has ended up rendering thousands of our youth who have wonderful skill training jobless, and in the nut shed, tend to increase the unemployment situation in the country. Meanwhile, SMEs form the backbone of the economy.”

He feather lamented that the non-existing policy to compel governments to allow local artisans to secure government contracts is the result of the high unemployment rate among the youth in the country.

“The complexity in the acquisition of permits and documentation process of local artisans to participate, secure and execute government contracts has become an obstacle, which adversely affects their business operations. The non-existent of a National Policy to streamline permitting and reduce the bureaucracy by simplifying bidding and competitive tendering processes has largely contributed to the massive unemployment situation among artisans” he lamented

“We want to state categorically that the marginalization of local artisans in the participation and execution of government contract is worrying and a threat to national security, as most of the youthful artisans are gradually been rendered jobless, Government’s “Ghana Beyond Aid” agenda and job creation will be defeated if the status quo remains same,” he said