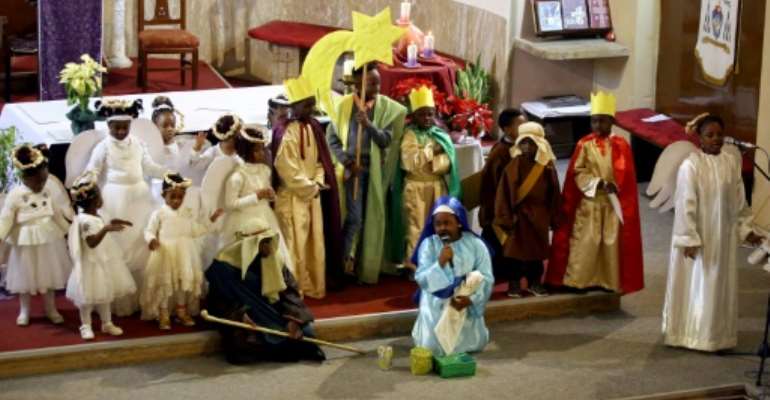 Tripoli is home to Christians from countries including the Philippines, India and Pakistan, as well as sub-Saharan Africa. By Mahmud TURKIA (AFP)

In the Libyan capital Tripoli, where war casts a long shadow over everyday life, a church offers something of a sanctuary for Christian migrants like Nigerian engineer Jonathan Joshua.

"I find life very difficult but here at the church... I forget I am in Libya, if only for a few hours", he told AFP in the run-up to Christmas at Saint Francis Catholic Church in Tripoli.

Arriving in the country four years ago, the 30-year-old lives and works in the capital's eastern suburbs.

"If the situation allows", he makes the trip to the church in the city centre to attend mass, making himself useful as an usher.

During Advent, the church is a place of comfort and hope -- this year, more than ever.

In early April, strongman Khalifa Haftar -- who has long held sway in eastern Libya -- launched a military offensive against the capital, seat of the UN recognised Government of National Accord.

Deadly fighting in Tripoli's southern reaches has hit civilians, and left migrants more vulnerable than ever.

A July 3 air strike killed 53 people at a detention centre for migrants in the eastern suburb of Tajoura.

On Friday afternoons -- a weekend in Libya -- the calm pervading outside the church doors contrasts against incessant comings and goings inside.

Christians, all foreigners, take the opportunity to flock to their place of worship. 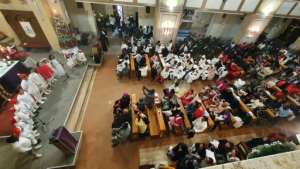 With fighting raging on Tripoli's doorstep, the church is a place of comfort for worshippers. By Mahmud TURKIA (AFP)

Sporting a white jacket and black trousers, Jonathan confers with fellow ushers for a candlelight mass as Christmas approaches.

Various languages mingle in the festive air, along with the laughter and tears of children impatient for the start of the ceremony.

Six young girls flap the wings of their costumes while slipping between the church pews, but are quickly brought back in line by Jonathan, anxious to ensure a degree of order.

"Attendance is in line with normal, at least so far", said Bishop George Bugeja, 57.

"We have kept the celebrations the same as usual," he told AFP.

The biggest Christian communities in Tripoli by nationality are from the Philippines, India and Pakistan, working in the health and construction sectors in particular.

Many others are from sub-Saharan Africa and particularly vulnerable due to a lack of immigration paperwork.

There has been a steady stream of Filipinos going home because of the deteriorating security situation, along with Nigerians, said Bugeja.

There was once a very large Filipino community "but now we are far fewer", said 62-year-old Erlinda, a nurse who has lived in Libya for 37 years. 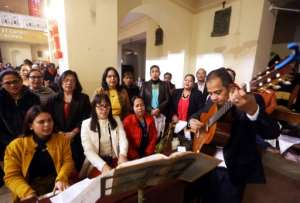 Tripoli's Filipino community was once very large but has diminished during years of turmoil. By Mahmud TURKIA (AFP)

She arrived at the age of 25, married a Libyan and bore four children, all of whom are now themselves married.

"Our life is here. My husband, my children and their families live and work in Libya".

While most Filipinos have left, others are reluctant to go home.

"They find it difficult to find work if they return home," Erlinda said. "We have a stable life here. At our age, it is retirement or we start again from zero".

For Erlina and her family, "the church is a reliable place... of peace and joy and sharing, above all in this period of the year when we celebrate the birth of Jesus Christ.

"These are moments of spiritual joy".

Italian Berto -- a teacher who arrived five years ago and one of the few Europeans still in Libya's capital -- came to the church just to "take a look".

"Nothing perturbs me in this country anymore. I am used to the life here".

"Either you love it or you hate it here", he mused.