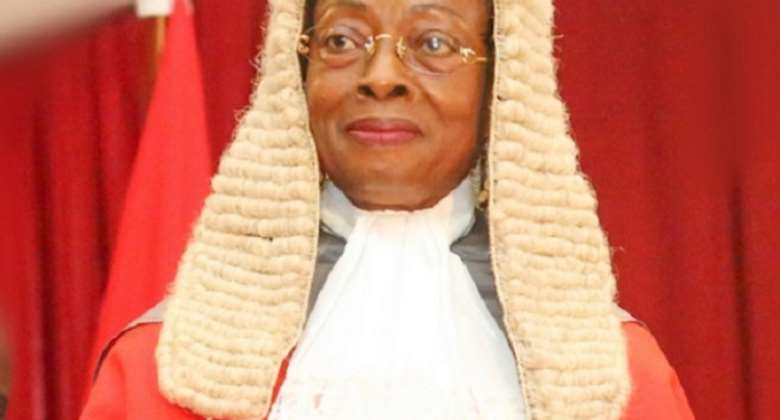 Outgoing Chief Justice Sophia Akuffo has made a call for the appointment of more women to the apex court of the land.

Her ladyship, Justice Sophia Akuffo speaking at a ceremony after delivering her valedictory judgement argued that there are more women on the bench and that should be reflected in appointments to the Supreme Court.

She explained that the increasing number of women in the law profession should also show in other levels of the bench and ultimately at the Supreme Court.

Speaking at the same event, the outgoing Chief Justice, Sophia Akuffo, also indicated that there may be no drastic changes to Ghana's legal education system even after her exit.

According to Ms Akuffo, who has defended the strict legal education regime, law students with the hopes of seeing standards lowered after her exit will be disappointed.

She noted that the incoming Chief Justice, Anin Yeboah, is one who believes in high standards and will not also compromise on legal standards.

“We need to be very serious about standards about legal education if we do not want to end up with lawyers who do more harm than good. Even though we do not have the same tenets as the medical profession where it says ‘do no harm,’ I think we can adopt that tenet to make sure that we will not in any way harm anyone in this country from unprofessionalism. I know people have been [hoping for] when the new Chief Justice comes… but they don't know. I think that he is even more of a stickler than I am. Let us maintain the standard of the profession because that is what differentiates us.”

Justice Akuffo reiterated her position arguing that there is a need for the country to uphold high standards in the legal profession in order for the lawyers trained in the country to meet international standards.

“Standardization makes life easy for everybody. It is predictability and minimizes corruption because when you establish standards and you let the whole world know what the measures and standards are, everybody knows what to expect. If you think the standards are too high and need to be adjusted, then we adjust it and publicize it for the whole world to know. But, it will not do a nation any good to compromise on standards because without standards, we will never have excellence and without excellence, we will never go forward as a nation.”