The UNDP Climate Promise: An Opportunity To Increase Climate Ambition 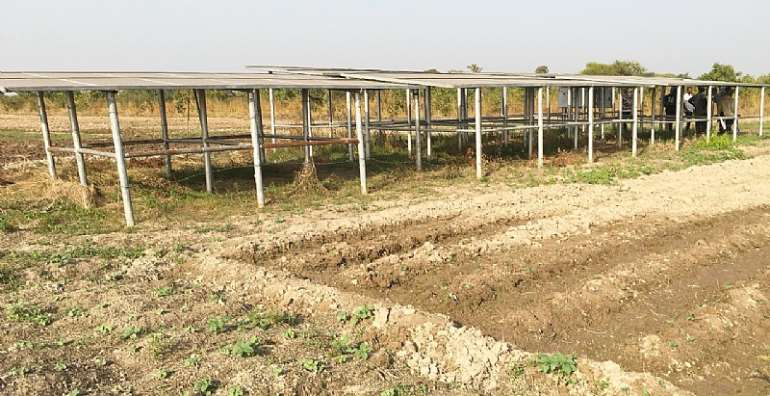 Local communities are facing the devastating impact of climate change in Ghana. This is more intense in the Northern Savannah regions where temperatures are fast rising.

The country's hard-won development gains and critical infrastructure that support the effective functioning of the ecosystem are at serious risk due to climate change.

This could slide back the significant progress made to sustain Ghana's medium human development status. Tackling climate change – limiting Green House Gas emissions and building the adaptative capacity of the rural and coastal population is no longer a question of choice, but a priority that should be aggressively pursued.

A review of all scenarios described in the special report by the Intergovernmental Panel on Climate Change (IPCC) on 1.5C in 2018 indicates that to escape the scorn of extreme weather events, global net anthropogenic greenhouse gas (GHG) emissions must fall by 45% by 2030 and reach net-zero around 2050. We are on the verge of the climate crisis and the world must respond now.

In the country's Nationally Determined Contributions, a two-tiered voluntary Greenhouse Gas (GHG) mitigation commitments to the Paris Agreement have been adopted. The commitments cover a 15% unconditional and additional 30% conditional targets below its 2030 Business As Usual (BAU) GHG emissions of 74 million tonnes compared to 2016 levels.

As we enter into the full implementation of the Paris Agreement in 2020, countries are encouraged to increase their climate ambitions by enhancing their Nationally Determined Contributions by 2020.

UNDP is leading by example. With the recently launched UNDP's “Climate Promise”, 100 countries will be supported to enhance their Nationally Determined Contributions by 2020, with a demonstrated increase in ambition.

In Ghana, UNDP is already having a strong collaboration with the government in the implementation of its NDCs under the ongoing Nationally Determined Contribution Support Programme with funding from the German and Spanish Governments and the European Union (EU). Under this collaboration, the Government of Ghana has finalized the development of its NDC implementation plan with two sectoral implementation plans fully developed for implementation. Financing and investment plan for the NDCs are being developed. The country has also concluded the disaggregation of nationwide NDC targets to sectoral targets and is currently setting up GHG emission registry for the operationalization of the Article 6 of the Paris Agreement.

Operationalizing Article 6.2 of the Paris Agreement

Ghana has demonstrated strong leadership on climate action with the support of international partners like UNDP, Switzerland and other private sector partners. For instance, under the Ghana-Switzerland Internationally Transferred Mitigation Outcome (ITMO) initiative, the country is collaborating with the government of Switzerland, private and multilateral organizations to operationalize Article 6.2 and demonstrates the scalability of Ghana's conditional mitigation commitments. The initiative will focus on the Ghana “National Clean Energy Access Programme (NCEP), which seeks to contribute to reducing GHG emissions by increasing access to renewable energy and energy efficiency technologies in Ghana.

As the 2020 NDCs implementation time is almost near, Ghana will need to continue to demonstrate its leadership in the fight against climate change. A review of the NDCs to include the agriculture and industrial sectors will be necessary for increasing Ghana's climate ambition under the Paris Agreement. Other sectors such as the Waste and the Forestry sub-sectors will also play a critical role.