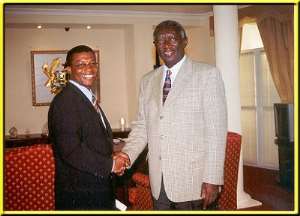 The Deputy Minister of Trade and Industry, Mr. Kofi Osei-Ameyaw, already battling media reports on various fronts, has described as transient, a decision by the Legal Services Division of the New South Wales (NSW) Administrative Decisions Tribunal of February 3, 2006, pronouncing him guilty of professional misconduct, and fleecing a Filipino couple. Reacting to The Chronicle enquiries recently, Mr. Osei-Ameyaw, also the Member of Parliament (MP) for Asuogyamang, pointed out that he did not contest the said case, brought against him by the New South Wales (NSW) Bar Association because as far as he was concerned, the issues involved had been investigated and adjudicated upon by the Migration Agents Registration Authority (MARA), the Australian migration agents' accreditation authority. Furthermore, he said the 'Notice of Decision of MARA to Mr. Kofi Ameyaw Osei and his wife, Ms Liba Osei' dated July 5, 2002, stated among other things that 'On 25 June 2002, having regard to all the material before it, the Authority considered the matter. You are advised that the Authority has decided that at this stage no further action will be taken regarding this complaint.' When the Bar Association commenced proceedings in the Administrative Decisions Tribunal over these same allegations after he had renounced his Australian citizenship, Osei-Ameyaw fired a response dated April 19, 2005 informing it that MARA, the statutory body that dealt with complaints made against Registered Migration Agents, investigated and determined the complaints. He informed the Tribunal that as far as he was concerned, that matter had been brought to a closure. He wondered why after renouncing his citizenship of the Commonwealth of Australia, giving up his Practicing Certificate by not renewing it, returning to Ghana, contesting and winning an election and currently a deputy minister, he should pursue the matter. He told the tribunal that since he had been cleared already, 'for the Bar Association to persist in this prosecution is unnecessary, unfair, unjust, inappropriate, unreasonable and constitutes double jeopardy.' But a 39-page report subsequently found the Minister culpable. He was accused of professional misconduct, for improperly inducing client to invest funds and misleading client, as well as misleading Law Society/Bar Association/LSC and also of 'unsatisfactory professional Conduct' for failing to advance and protect the interests of client. Mr. Osei-Ameyaw dismissed the charge that he had misled the NSW Bar Council by stating in a letter dated 28 June, 2002, “I did not personally prepare any of the applications ...” adding that even though his agency's stamp, bearing his number, was used in the preparation of the said declaration, his response was to a specific question of personal involvement in the preparation of the said documentation. The Tribunal had ruled that the statement was false and that in the preparation of the submissions by Caprock Immigration Consultants to the Minister for Immigration dated 21 December 2001, he had participated in the preparation of a statutory declaration of the Filipino Ms Jocelyn Bautista in support of the submissions. On the count of deliberately misleading his clients, Mr. Alberto Bautista and Ms Jocelyn Bautista to invest in Lloyds International College, in which he held an interest as assurance of the migration application of Mr. and Mrs. Bautista, Mr. Osei-Ameyaw said certain levels of investments in the country enhanced the chances of applications. He explained further that since the failure of the application of the clients, the shares were re-allocated and their monies refunded to them. “The practitioner improperly induced Mr. Alberto Bautista and Ms Jocelyn Bautista, to invest funds in the sum of $150,000.00 for which they received 150,000 shares in Caprock International Pty Limited, ACN 060 771 556, a company in which the practitioner and his wife held a controlling interest,” the Tribunal disclosed. Also, the bank cheque provided to the practitioner on 27 February 2001 specified the payee as Lloyds International College without the informed consent of Mr and Mrs Bautista, the cheque was applied to the capital of Caprock by way of the issue of 150,000 'A' Class shares in Caprock to Mrs Bautista."

Officer arrested for forcefully kissing the thighs of woman ...
53 minutes ago