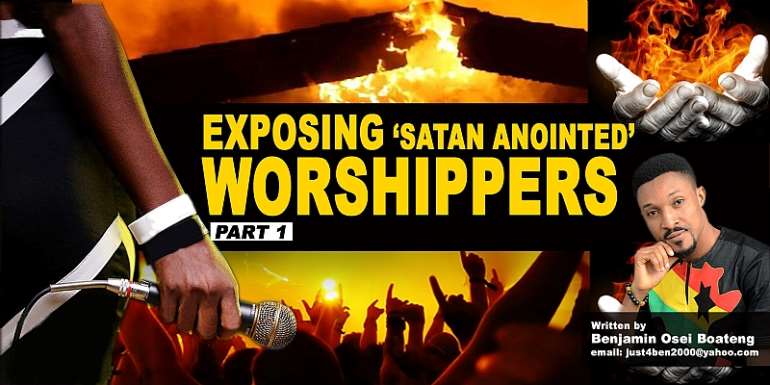 Worship music has been an integral part of Christian gatherings since its establishment from the day of Pentecost in Biblical days. Worship in the form of music in the church has evolved over centuries. There is a school of thought who believes that the modern church has conflated worship and entertainment. In fact, many critics are of the opinion that the modern Church is in a dilemma as to how to properly dichotomize their urge to be entertained through hilarious sermons, fancy services, good music, serene church atmosphere and the spiritual disciplines, many of which are predicated on consecrating oneself from ungodly pleasures of this life. Many have questioned whether worship music should necessarily be entertaining, or must have entertainment value.

It is quite common to find worship music programmes organized annually by mainstream gospel artistes and upcoming musicians. Critics have questioned the motive behind some of these programmes. Whiles some do these for free, others charge exorbitant fees ostensibly to give others the opportunity to worship God with them.

Though some are led by the Spirit of God, others embark on these programmes with the ultimate goal of making profit or being recognized and considered for award schemes like the Ghana Music Awards (GMA), 3Music Awards and the like. This is what has given birth to a new trend, Worshiptainment. Thus, the entertainment version of worship.

These worship programmes are fast breeding fake worshippers with voices. These are the singers who spend endless time on dressing, skin toning, make-ups and stage presence. They tend to over-concentrate on lighting systems, chaperons, uniforms and patrons of their events and not God. The slippery slope is; shifting the focus off God Almighty and the sufficiency of His Word in song ministration, to figuring out what works to attract money and pleasures of this world. They can best be described as Satan Anointed Worshippers.

In as much as ambience is important in creating an atmosphere for miracles, true worship experience is not necessarily created by stage lights, instruments, sweet melodious voice(s) or the number of patrons. Unfortunately, the modern church tends to evaluate the success or otherwise of a church service or worship programme on the number of patrons present and not the impact it made on their lives. Just as Joseph Goebbels said “If you tell a lie big enough and keep repeating it, people will eventually come to believe it”. Many have been indoctrinated to believe that a good worship music leader is the one who is able to sing trending songs.

Because of the critical role worship music plays in church, the devil sometimes anoints worship leaders with pride. Some begin to make outrageous demands from their local churches. Others choose to leave the very church that nurtured their talent in exchange for material things. Regrettably, some pastors also poach these singers with money and other material things.

The Heresy of Modern Worship Music
Years of observations, seem to suggest that many so-called worship leaders and instrumentalists are hirelings and not truly committed members of their respective churches. Some men of God stop at nothing to employ singers without properly scrutinizing their backgrounds. It is quite shocking to see churches with huge congregants just hire out their worship team members and instrumentalists, even if they are not committed Christians or committed to their local church. The ripple effect is that when a gifted worship leader or musician first comes to Christ, they are inducted into a creeping culture of Play for Pay rather than the leadings of the Holy Spirit. It is a common knowledge that many singers headlining worship programmes have a very superficial relationship with the Lord and His Church.

Again, because these worship leaders help draw crowds into their respective churches, pastors/church leaders find it difficult to enforce or instill discipline in them. They turn a blind eye to the immoral or unethical behavior of their most talented musicians and singers. Usually, these Satan anointed worshipers easily get idolized and celebrated merely because of their talent even though they have questionable lifestyles.

We seem to be in an era where a lot of churches only care about talent and not divine calling. Consequently, they indirectly perpetuate a culture of performance more than that of intrinsic worship. The effect is that they equate worship more with performance, forgetting that, what one needs to worship in this context is not necessarily a voice but a humble heart.

Characteristically, Satan anointed worshipers do not often sit under the Word after they perform. To them, the highlight of every service is their performance, everything else that ensues, is not so important. It is fascinating to observe many worship team members leave the service after they perform and attend to other personal endeavours. Erroneously, they believe that the focus of worship is more about them than about Jesus Christ. They are ego-driven megalomaniacs, overly sensitive and find it extremely difficult to subject themselves to corrections since their identity is more rooted in their talent than in the source of it. They do not study the Word but rely upon performance sessions in church for their walk. Many have no prayer life and rarely study the Bible for more inspiration.