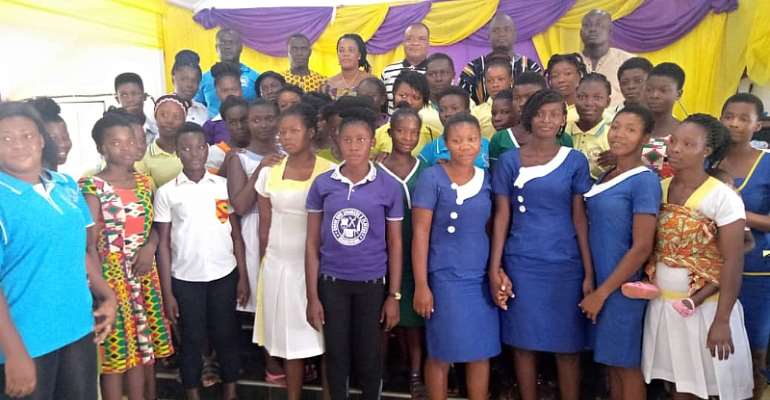 The youth apprenticeship programmes (YAP) is one of the flagship programmes of the government which seeks to create and facilitate the acquisition of technical and entrepreneurial skills among the youth. It also seeks to reduce the high rate of youth unemployment in the country.

At a sensitization training programme for the beneficiaries organized by the District Assembly on Friday 13th December, 2019, the District Chief Executive, Honorable Faustina Amissah said the programme commenced in 2018 and beneficiaries are expected to pass out in 2021. She stated that the Assembly is ready to commit resources to ensure that these noble and laudable programmes see the light of day within the Obuasi East District and its surroundings.

She then assured the beneficiaries that, after their apprenticeship training they will be registered to write NVTI certificate Examination to enable them get Certificate. She further promised them that start-up kits will be provided for them so they should take the programme very serious and be disciplined too.

The District Co-coordinating Director for Obuasi East District Assembly, Mr. Emmanuel Ntoso also advised the apprentice” Whether formal or informal you have the right to work ; Fashion design has become a very lucrative venture so the youth should take it serious".

Director for National Board for Small Scale industries (NBSSI) and Business Advisory Centre (BAC) Obuasi East District Assembly, Kelvin Ofori-Atta on his part praised the District Chief Executive Hon. Faustina Amissah for sponsoring the youth in the District in an apprenticeship programme to reduce youth unemployment. He added that the success of the programme is in the hands of three parties, that is, the master craftsman, the parents and the apprentice themselves and that all should contribute for the success of the programme.

Mavis Sarfo, a delighted apprentice on behalf of all the beneficiaries expressed her appreciation to the President Nana Addo Dankwa Akuffo-Addo and the District Chief Executive, Madam Faustina for their timely intervention and promised that, they will take their training very serious.