US envoy to South Sudan warns of further sanctions 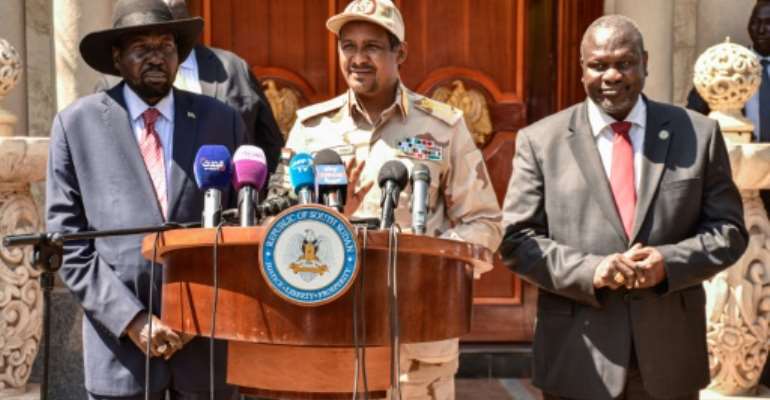 The US ambassador to South Sudan on Wednesday warned that Washington would not hesitate to slap additional sanctions on "spoilers" holding back peace in the war-torn African nation.

The United States this week slapped sanctions on two South Sudan ministers, accusing them of obstructing a peace accord signed in 2018 that has paused, but not resolved, five years of conflict.

Hushek stood by the decision -- which was criticised by the office of South Sudan President Salva Kiir -- and warned of further measures if peace talks failed to advance.

"We are looking at all spoilers of the peace process," Hushek told reporters in Juba during his first press briefing since returning from Washington.

"Sanctions... is one of the tools we will continue to have in our tool box, and we will use them."

Kiir and his former deputy, Riek Machar, agreed Tuesday to form a power-sharing government before a February deadline.

The pledge to join forces is the linchpin of the truce signed by Kiir and Machar, whose falling out in 2013 kicked off fighting that left nearly 400,000 South Sudanese dead.

But they have missed two deadlines to do so, most recently in November, when the pair were given another 100 days to come together in a coalition.

The US, frustrated at repeat delays, and having warned of consequences if the men stalled again, recalled Hushek in protest, and announced it was reevaluating its relationship with South Sudan.

"There have been missed deadlines all throughout this process," Hushek said.

"If the process moves forward, this is the way to prevent future sanctions."

Earlier this month the US also restricted visas to South Sudanese determined to have undermined the road to peace.

Talks between Kiir and Machar, a former rebel leader who lives in exile, have stumbled over disagreements about territorial boundaries in South Sudan, and a pledge to unify their fighters in a national army.

Successive peace deals and mediation bids have failed to achieve a lasting peace for the world's youngest country, whose independence from Sudan in 2011 was strongly backed by the US.

The September 2018 ceasefire signed by the warring parties has largely held, delivering the longest period of peace in South Sudan's short history as a nation.

United Nations special envoy to South Sudan David Shearer said Wednesday that delays in the transition to peace had eroded trust and stoked fears that "political will between parties is waning".

"The choices that South Sudan's leaders make now will determine this country's future for generations to come," he told the Security Council.