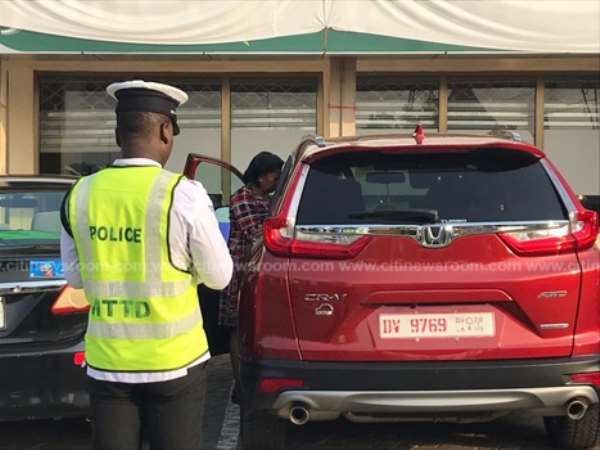 Citi FM/TV's War Against Indiscipline (WAI) campaign has nabbed high profiled staff of the Bank of Ghana, World Bank, SSNIT, lawyers and others in different security uniforms at the East Legon tunnel.

While some of the culprits, like the Pensions Manager of SSNIT Joseph Poku, was apprehended for using unauthorized number plates, the driver of a woman who identified herself as a senior staff at the Central Bank was caught neglecting road markings to get ahead of traffic towards the tunnel.

“We are back in East Legon, an intersection which is known for reckless and indiscipline driving. Today we've been able to apprehend a number of them. Most of the offences were bothering on neglecting road markings. Another offence that is coming up is the fake DV plates and today we've arrested a few of them. There were a few unapproved number plates that we actually made them go regularize it. Some were using stylish number plate which is not approved.”

“I want to use this opportunity to caution motorists to always go for the approved DVLA number plates. One thing about number plates that we don't usually joke with is that it is a security feature and for that matter, if it is fake, it can give a lot of security implications,” he said.

The War Against Indiscipline campaign has led to several reckless drivers getting arrested for various crimes on the road.

It started in May 2019 and in June, the station roped in the police to name, shame and punish persons who break road traffic regulations.

The campaign is intended to run until May 2020.